Despite the challenges of inflation, sentiment remains positive in the food and drink sector, says Roisin O’Shea, head of Food & Drink Sector at Bank of Ireland.

Despite the challenges of inflation, sentiment remains positive in the sector (85% of those surveyed in Love Irish Food industry survey in May ’22 were optimistic for their firms prospects).

Volumes in the processing sector continue to grow (CSO Volume of production for Industrial Sectors – March-May 2022 Food) on the back of a strong export performance and Brexit related import substitution.

Input increases from 2021 have been substantially recovered, which has resulted in food inflation hitting 6.7% (CSO) in June 2022 compared to the previous year. Businesses continue to focus on cost recovery, with further price increases likely to be implemented towards the end of this year, as the impact of commodity and energy price increases resulting from the war in Ukraine make their way to bills of materials. From a transaction perspective, businesses are looking to increase capacity – both in terms of production and storage – in order to meet growing opportunities.

Export Growth: Irish Food and Drink exports have rebounded strongly in 2022 with January to May figures showing growth of 26% (Source: Bord Bia Performance and Trade Prospects) compared to the same period in ‘21. Growth in exports to the EU has been one of the strongest drivers of overall performance, some of which may be due to Brexit related substitution on the continent. North American exports performed well – largely driven by the continued growth of Irish Whiskey – but also by a significant increase in infant formula exports, driven by supply issues with domestic producers. Exports to China continued to fall, impacted primarily by the reduction in demand for Pigmeat as local production ramped up in the aftermath of the swine flu outbreak. From an overall sector basis dairy continues to be the main driver of growth.

Brexit Related Import Substitution: The balance of trade on food and drink between Ireland and Britain has changed significantly. Pre Brexit, in 2019, over Jan to May, food and drink imports from Great Britain were at a level that was approximately 82% of exports, however post Brexit in both 2021 and 2022 it had dropped to under 60% – see Figure 2. The pre Brexit figures represented reflected the immense variety of food and drink products that arrived on these shores from consolidated warehouses in the UK, reflecting the ways in which large multinationals tended to treat the UK and Ireland as one entity for distribution purposes.  Ireland was and continues to be the largest export destination for UK food and drink. While imports from the UK have increased from the low point of 2020 when UK companies struggled to adjust to the new customs formalities, the balance of trade has changed significantly and appears now to be embedded. This has created new opportunities for local producers to substitute products previously coming from Great Britain.

Inflation Management: Significant input cost inflation was already a feature last year before Invasion of Ukraine. In 2021, the Food and Agricultural Organisation basket of commodities was 28% ahead of the previous year and there were also significant input increases related to energy, both in terms of direct energy supply and indirect effects on packaging.  Producers struggled to recoup all of the input cost increases in 2021, with some delayed to early 2022 and this had a knock on effect on consumer food inflation in 2022.  CSO Food and Non-Alcoholic Beverages showed an inflation level of 6.7% in June 2022. We are yet to see consumer price inflation reflect the substantial input costs that are anticipated in 2022. Looking to the FAO price index as a benchmark, while showing some fall back since April, the basket of commodity prices tracked remains in real terms 18% ahead of 2021 and energy increases also have to be factored into account. In the UK, the Institute for Grocery Distribution forecast UK food price inflation of up to 15% before the year ends.

The ongoing negotiation on prices between suppliers and retailers continues to be challenging. In the UK, the most recent report by the Groceries Code Adjudicator (GCA) highlighted the strain on supplier retailer relations. A quarter (26%) of suppliers said they had experienced a refusal by a retailer to consider a request for a cost price increase (CPI) or an unreasonable delay from the retailer in concluding the request. It is the most raised issue in the GCA’s surveys over the last five years.

The focus on cost management, resulted in some delays in new product development and innovation as suppliers concentrated on key sellers and increased efficiencies. Danone recently highlighted that it was looking at consolidating its range of products as a cost cutting response.

Supply Chain Shortages and Delays: Global supply chains continue to be challenged, particularly as a result of the war in Ukraine and to a lesser extent COVID-19 lockdowns in China. Supply chain volatility has been reflected in higher stock holdings amongst operators as they seek to insulate themselves from delays. This has absorbed additional working capital. From an Irish perspective, pricing and delays, rather than availability have been the primary issues, the exception being sunflower oil, which is increasingly being substituted as an ingredient.

Return to Foodservice: In line with the relaxation of Covid restrictions, Bord Bia project that Food and Drink sales in Foodservice with grow by 58% in 2022, albeit that a significant element of growth will be inflation driven. As consumers return to out of home eating, there has been a reflected drop in retail sales. Kantar suggests that retail sales in grocery have fallen by 6.5% in the 12 weeks to May ’22, however given the previously mentioned impact of inflation the volume drop is likely to be in double digit figures. For suppliers, anticipating these changes has been challenging, particularly given the current commodity volatility and supply chain delays.

Climate Change Impacts and Response:  The agrifood industry continues to be at the forefront of both climate related impacts and responses.  The impact of climate change on commodity volatility continued. For example, increased wheat plantation in India, was hoped to alleviate some of the shortages caused by the war in Ukraine, however the heatwave in May resulted in decreases in yield of between 10% to 35% in key wheat growing areas. From a global marine perspective, as seas warm, salmon farming production in some areas has been challenged. In Italy up to one third of agricultural production – including olive oil and tomatoes – is at risk due to the recent drought. As we look ahead, regardless of the outcome of the war in Ukraine, it is clear that climate change is going to result in increased commodity volatility and supply chain challenges.

Food producers, have also been at the forefront of response to the challenge. According to the Love Irish Food PWC SME Barometer over 70% of respondents have or are working towards a net zero commitment. Key sustainability investments reported are in the areas of energy consumption (78%), packaging and plastics reduction (68%) and water usage (50%). 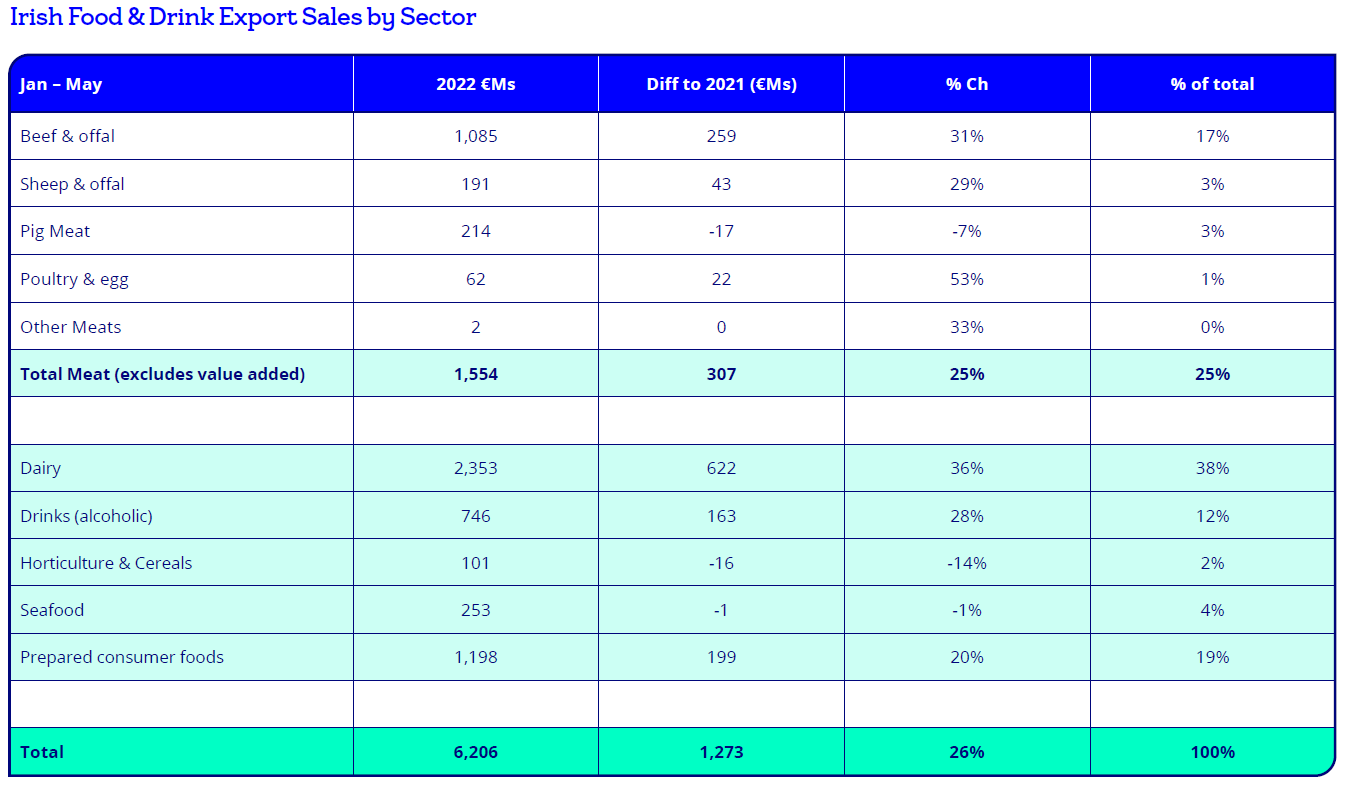 Appetite for investment in the industry was strong in 2022.

Capex driven development drove investment as operators increased capacity to take advantage of Brexit related import substitution and expanding global markets. Due to the tightness of the labour market, automation was a key feature of developments. The need to retain and attract workers was also reflected in the growing trend of operators becoming “accidental landlords” in a bid to provide accommodation for key workers. There was also and an increased use of stocking loans as operators sought to build resilience in their supply chains and sought to manage the volatility of commodity prices.

Private equity and venture capital funds continued to be active in the sector in the first half of 2022. Domestically, the Redesdale Fund, focused on early stage food and drink companies, closed two investments, in Soothing Solutions and Thanks Plants. Melior Equity Partners, also announced investment in the long established Irish SME Rose Confectionery.

On an international level, Kerry continued a very targeted acquisition run focused on precision fermentation and functional ingredients with the purchase of Enmex and c-Lecta. 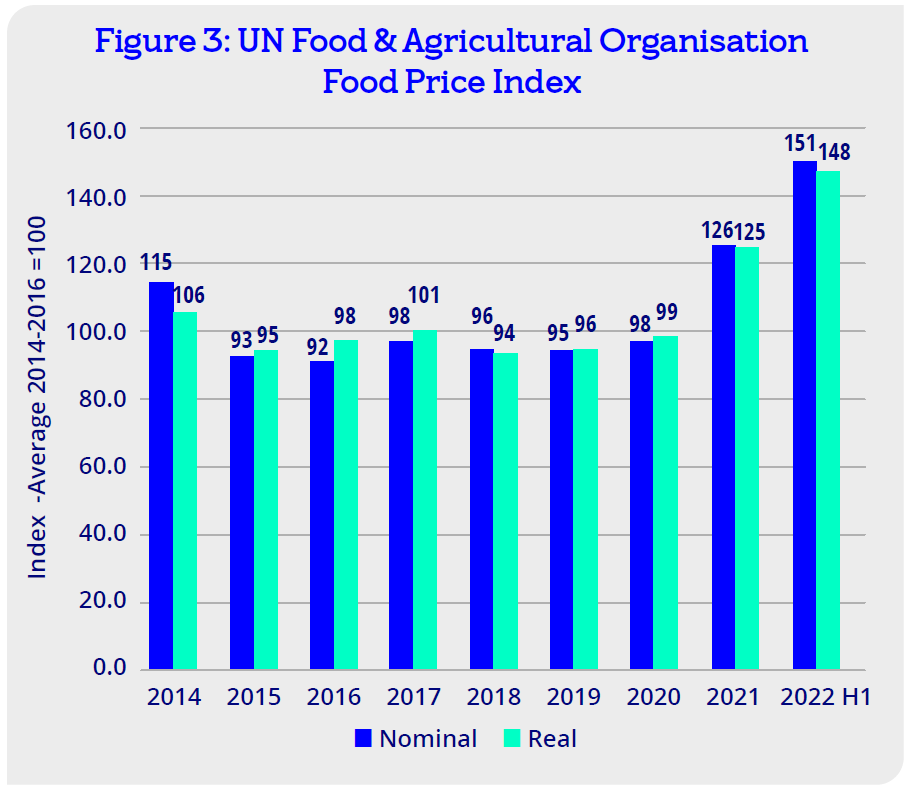 Ongoing Inflation: We are likely to see further price increases relating to the war in Ukraine pass through to consumer baskets towards the back end of the year. Futures prices, of key commodities, remain elevated, albeit at a lower level than peaks earlier in the year.  Energy prices continue to rise and the rise in gas prices in particular will affect food production. The effect of inflation on consumer behaviour in food purchase and consumption is still evolving.  In foodservice, menus are already being reworked to address price rises. In UK grocery, consumers are moving towards cheaper protein sources. In Ireland, there are some indications of a move towards private label in grocery.

Energy Uncertainty:  Industry across Europe has been asked to make contingency plans for energy shortages. In the event of any limitation in supply, food and drink production would be prioritised, however, the likelihood of increased energy costs in this scenario would put further strain on operators and result in additional price increases to consumers.  Recent news that the government is exploring a state aid scheme for companies with high energy usage will be particularly welcomed by the sector.  While renewable energy investments have been primarily focused on the corporate sector to date, particularly those enterprises subject to the EU Carbon Trading scheme, increasingly SMEs are looking to improve their energy costs through the use of renewables.

Climate Change Response:  As the government looks to finalise carbon budgets, it is becoming more likely that producers in Ireland of dairy and meat, will be asked to do more with less, as the era of primary production growth ceases. Operators in these sectors will be increasingly focused on waste recovery, automation, energy efficiency and added value production as they look to maximise profit with a static or reducing supply of raw material. However, new opportunities in plant-based eating are being unlocked in areas from vertical farming, to mushrooms and alternative proteins. Increased focus by the government on food and packaging waste reuse will also create opportunities in the circular economy.

How to craft business documents 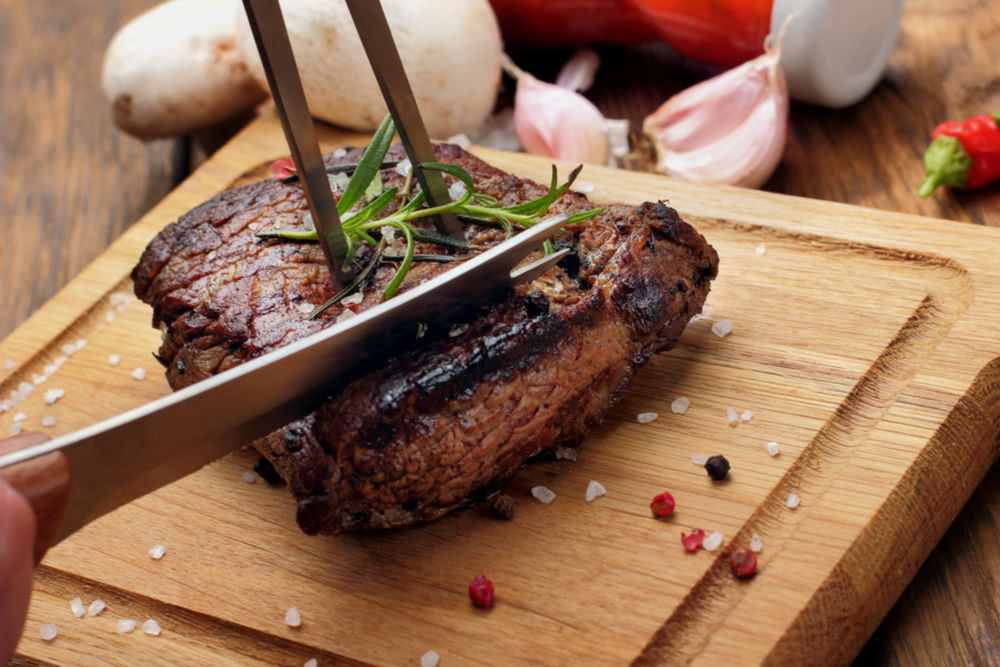 Bank of Ireland head of Food & Drink Sector Roisin O’Shea looks back on the key trends of 2021 and provides an outlook for 2022. 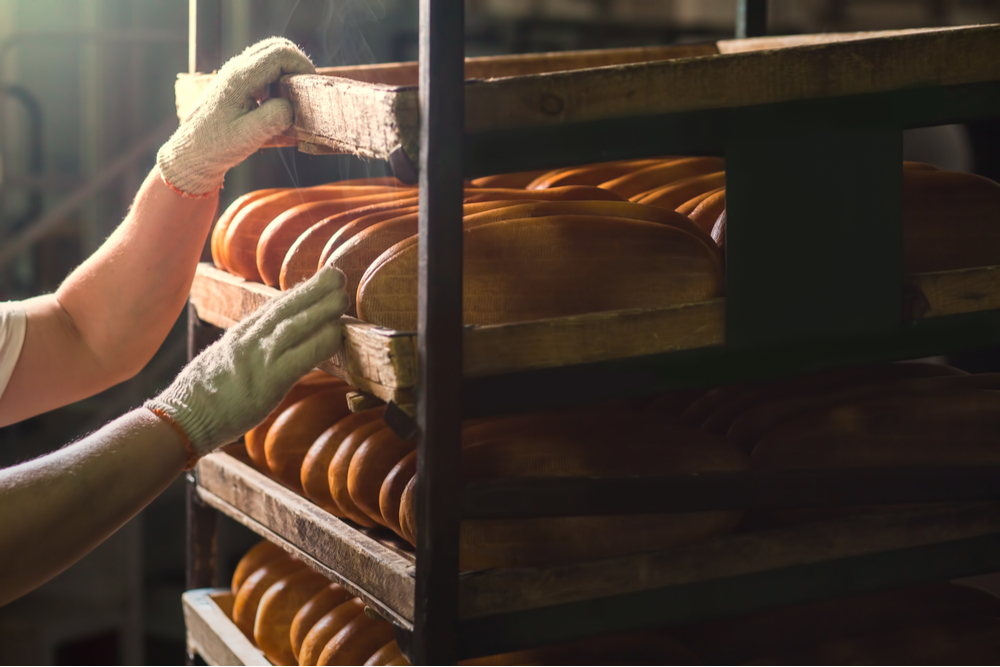 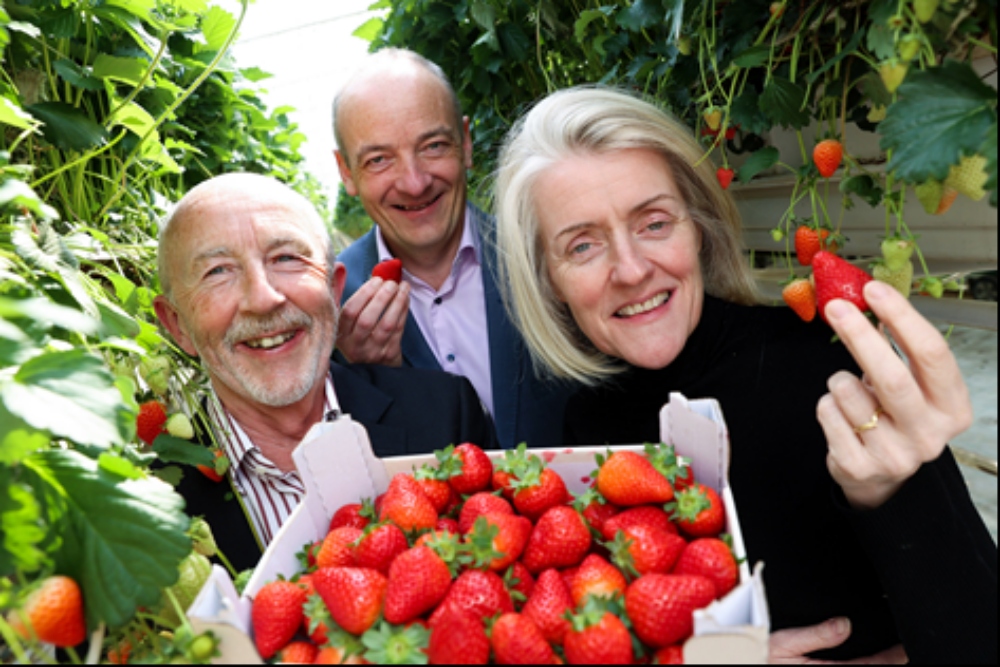 Irish food sector confident about prospects for its businesses