Bank of Ireland senior vice-president of Foreign Direct Investment Stephanie Fitzgerald-Smith’s love of languages has opened up a world of opportunity.

You could say Stephanie Fitzgerald-Smith has a penchant for languages. She collects them the way some of might collect photos or songs or books or souvenirs. As a toddler her mother taught her to speak French. Years later, she is fluent in a variety of languages, including Mandarin, which no doubt comes in handy in her role as senior vice-president of Foreign Direct Investment at Bank of Ireland.

“I’m responsible for helping international companies that are starting up in Ireland and guiding them through the onboarding process and addressing their bank requirements, from corporate and business banking to staff banking and foreign exchange.”

“Ireland is definitely punching above its weight. Brexit has done us favours in that we are now the largest English-speaking nation in the EU. We provide businesses from all over the world an ease of access to the EU market”

Fitzgerald-Smith joined Bank of Ireland from IDA Ireland where she worked in its Growth Markets division, managing relationships with businesses in India, China, Australia and across South-East Asia.

“I lived in Shanghai for five years where I did a Master’s in teaching in Mandarin and International Studies. In Ireland I did a degree in Chinese and Spanish and so I am fluent in these languages and this enables me to communicate with a wider network of people.”

As mentioned, her love of languages began with her mother, a French and English teacher, teaching her French from age two which she continued to study along with Spanish up to her Leaving Cert. After university she travelled to China and immersed herself in the local culture as well as maintaining her links with Ireland by joining the Gaelic football team in Shanghai.

“When I travelled to China it really opened my eyes to the opportunities that exist out there. I really got involved in the Irish community, played Gaelic football, and after I graduated I won a Chinese government scholarship to move back over to China where I did a Master’s. One night someone from the consulate in Shanghai overheard me speaking Chinese on the football pitch to some local people and the next day the phone rang and I was asked to MC the St Patrick’s Day parade in Shanghai.”

The experience was a profound one for Fitzgerald-Smith and led to her working with the Irish consulate of Shanghai where she became immersed in both the foreign direct investment and the Irish export agendas through IDA Ireland and Enterprise Ireland, ultimately resulting in her taking a full-time role with IDA Ireland.

Her decision to study Chinese – at the time she was among the first cohort to study it at UCC – was as much about taking on a challenge as it was about seeing an opportunity. “I’m a very visual person and Chinese is obviously character-based and logical. It’s also a tonal language, so you can say the same word five ways and it can mean a number of different things.”

The language still comes in handy in her banking job. “Particularly with new customers it’s a great skill to have and the more established companies based in Ireland really appreciate it. There are a lot of Chinese aircraft leasing businesses here and nine of the 10 top Chinese banks have a presence here.

“The language comes in very useful when new projects come to Ireland, such as Wuxi in Louth. Speaking the language goes beyond just the language, it indicates that you understand and appreciate their culture. Prior to Covid I would have travelled to China annually because relationships are so important in Asia. In China, it’s a cultural thing that we become friends first, then we do business. So repeat visits and building rapport is central to keeping good customer relations over time.” 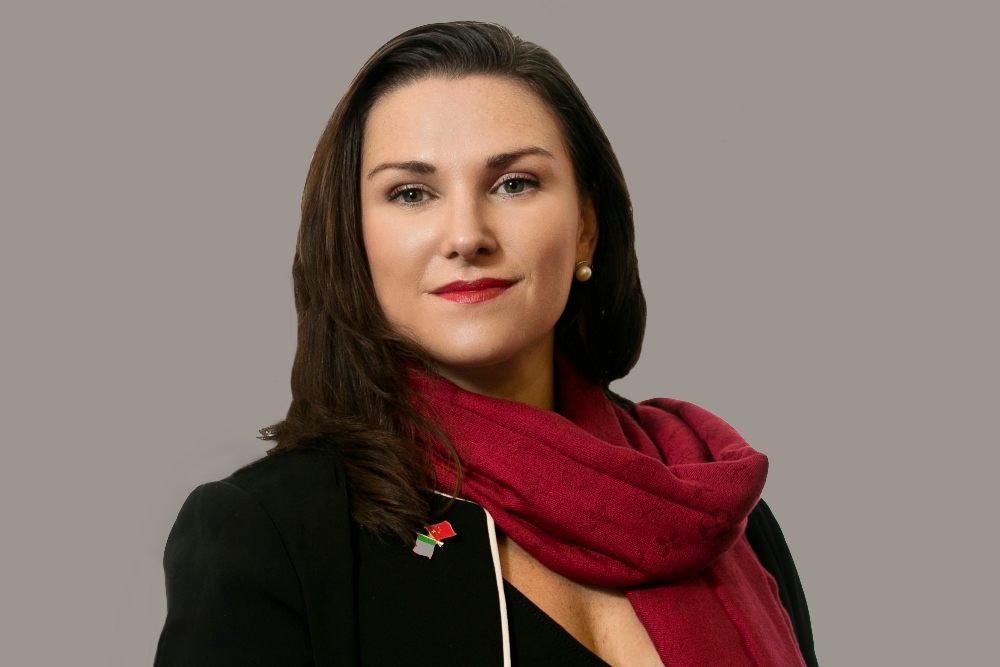 Fitzgerald-Smith says she was immensely proud at how Team Ireland rallied during the pandemic to keep Ireland open for international business. “From an FDI perspective, even though most of our meeting were conducted remotely, it was our biggest year to date for investment. FDI investment in Ireland just seems to be coming hard and fast.

“Although there were some fears around the increase in the corporate tax rate from 12.5% to 15%. That’ not the reason why companies come to Ireland. Companies like Google and Facebook come here for the talent and have created a community of talent here. There’s a considerable community of European people living in Ireland with obvious linguistic capabilities. Lately I’ve been speaking to a lot of South African financial companies who are looking to locating in Ireland because of that availability of talent and the community that has grown up around it.

“In terms of China, we have had Wuxi invest in their biologics facility in Dundalk that really made headlines in China and as a result we have other Chinese companies wanting to set up where Wuxi has set up. In China they have biotech parks where lots of these companies set up together.

“In Cork there’s a cybersecurity cluster being formed and in Galway there’s a massive medtech cluster. So, it’s all happening naturally and it is really important to roll in behind the IDA and direct more investment into the regions.

“The pandemic ironically accelerated much of this and you are seeing investors like Tata (headquartered in India) expand in Letterkenny, and this is proving valuable to Irish people who can move back to their home country and have a lot of opportunities.”

Like most Irish people she was baffled by Brexit but sees how Ireland is benefiting. “Ireland is definitely punching above its weight. Brexit has done us favours in that we are now the largest English-speaking nation in the EU. We provide businesses from all over the world an ease of access to the EU markets and this has brought us more centre stage in terms of Asia, particularly in areas like technology and biologics. There’s a true awareness there now.”

Despite reports of a tech slowdown in Silicon Valley, Fizgerald-Smith says Ireland is still landing considerable tech investment projects, notably in fintech. “Ireland has a great international reputation in terms of pharma and projects like Wuxi are boosting awareness in Asia. Telecoms tech firms like Huawei as well as born on the internet companies like TikTok are also growing this awareness. We are seeing wins across engineering and aircraft leasing and Ireland’s reputation for safe baby food is still quite a big thing in China.”

When it comes to Bank of Ireland working with these incoming businesses, Fitzgerald-Smith said it is an intrinsic relationship that begins early on, often before a business even decides to locate in Ireland. “It is vital that the bank gets behind IDA Ireland and really supports their messaging. When these businesses decide to invest here, it is our job to ensure that they enjoy a smooth onboarding experience. We have refined our processes and our number one modus operandi is to be responsive. We work closely with our money laundering division and our business assurance team to make the process run smoothly and compliantly.”

Last year Bank of Ireland joined the IBOS Association, an alliance of some of the biggest banks of the world, enriching the network’s geographic coverage. Fitzgerald-Smith says this will play a pivotal role in generating compelling global opportunities for the bank.

“It has already resulted in us getting introduced to a lot of companies at maybe a much earlier stage.”

In conclusion, Fitzgerald-Smith said she would like to see more Irish people study Chinese. She was involved in helping to design the Leaving Cert curriculum for Chinese. “The UK is probably a little ahead of us and Scotland has integrated Chinese into its education system, so I would like to see us move that way. I think it says a lot about a country if you have a strong linguistic capability and can communicate with nations in their own language.” Eight expanding US and European businesses have given Ireland a vote of confidence for their future. 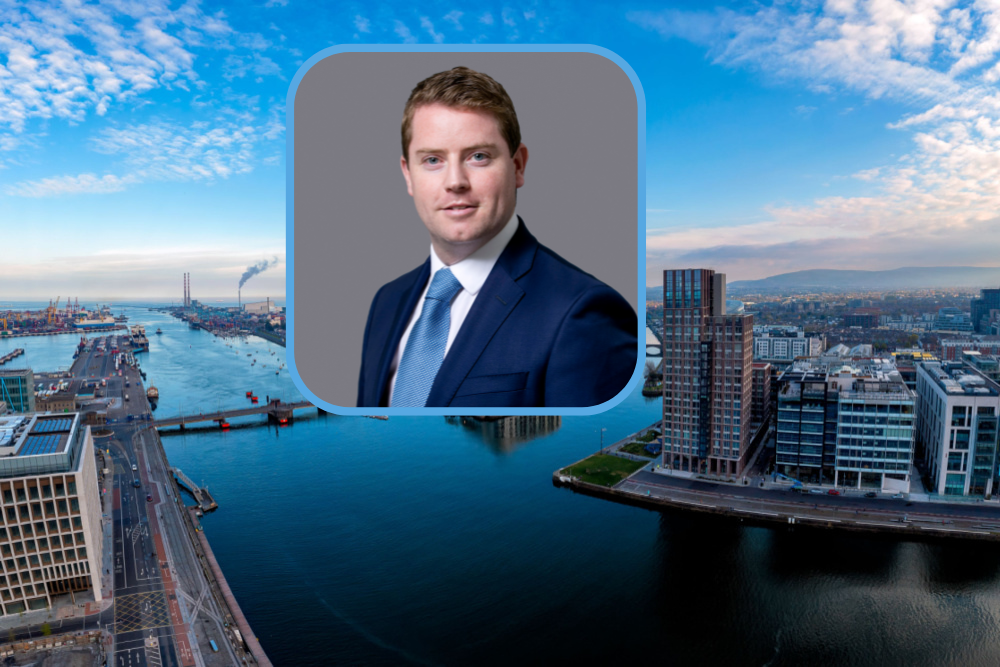 Bank of Ireland’s head of FDI Kevin Elliott praises Team Ireland for how it responded during the pandemic and says despite the global economic storm clouds, Ireland’s best days lie ahead.