Podcast Ep 112: It took Devan Hughes five different start-ups before hitting his stride with the success of Buymie, which is forging deeper ties with grocery retail giants. He talks candidly about the highs and lows of entrepreneurship and building a next generation platform for the future of grocery.

A “whirlwind” is how Hughes actually sums up the past 24 months or more, a period that has seen his young company become effectively the author of a new chapter in grocery retail in Ireland and the UK.

His platform has unleashed a legion of ‘personal shoppers’ across Dunnes, Tesco and Lidl stores in Dublin, Cork and Limerick. In recent weeks the same-day digital grocery platform secured a new partnership with UK retailer Asda to offer a big-basket, same-day grocery delivery service to Bristol and Leeds residents in the UK.

“Pre-Covid we were a team of 12 or 13 people in total and we had maybe 40 or 45 personal shoppers. Today we’re 72 full-time employees, we have more than 500 personal shoppers operating across six cities in two countries”

The new service will operate under the brand “Asda Express powered by Buymie” and marks Buymie’s first partnership with a major UK retailer. Using the platform Asda customers can communicate directly with a ‘personal shopper’ whilst in store and get their big shop brought to them in as little as an hour.

Buymie has grown over 500pc year on year comparing January 2020 to January 2021. In June 2020, Buymie closed a Series A funding round of €5.8m in new investments into its business. In recent weeks the business secured a further €7m in funding to feed its rapid expansion plans.

Buymie is now available to service more than 2m people in Ireland and the UK.

“The past 24 months have been such a whirlwind for us as a business,” Hughes says emphatically. “Pre-Covid we were a team of 12 or 13 people in total and we had maybe 40 or 45 personal shoppers. Today we’re 72 full-time employees, we have more than 500 personal shoppers operating across six cities in two countries. I feel exhausted just thinking about it really.”

It’s been quite the journey and he admits the challenge for the team has been keeping their heads down and not being distracted by what’s been happening in the market.

“I think it’s become generally accepted that we had about five years of e-commerce adoption in the space of 18 months. And that means those who wouldn’t have tried online grocery for another couple of years tried it far earlier in their customer lifetime journey than they would have. And that’s really accelerated the penetration of online grocery as a channel.

“We found ourselves in January of last year at the peak of Covid mania and online grocery had reached about 15% market share. That has contracted back down now and in Ireland operates at around 7% penetration, whereas previously it was 3%. In the UK and Northern Ireland it is at north of 10% market share.”

The turning point for Buymie was that it effectively went from being on the fringes of the classic retail experience to becoming an “essential service,” and like many things that changed during the pandemic such as the onset of flexible working, people aren’t in any hurry to go back to the old ways. “And I’m happy to say that I think we did a reasonably good job; we did right by our customers and right by our retail partners during that period.” 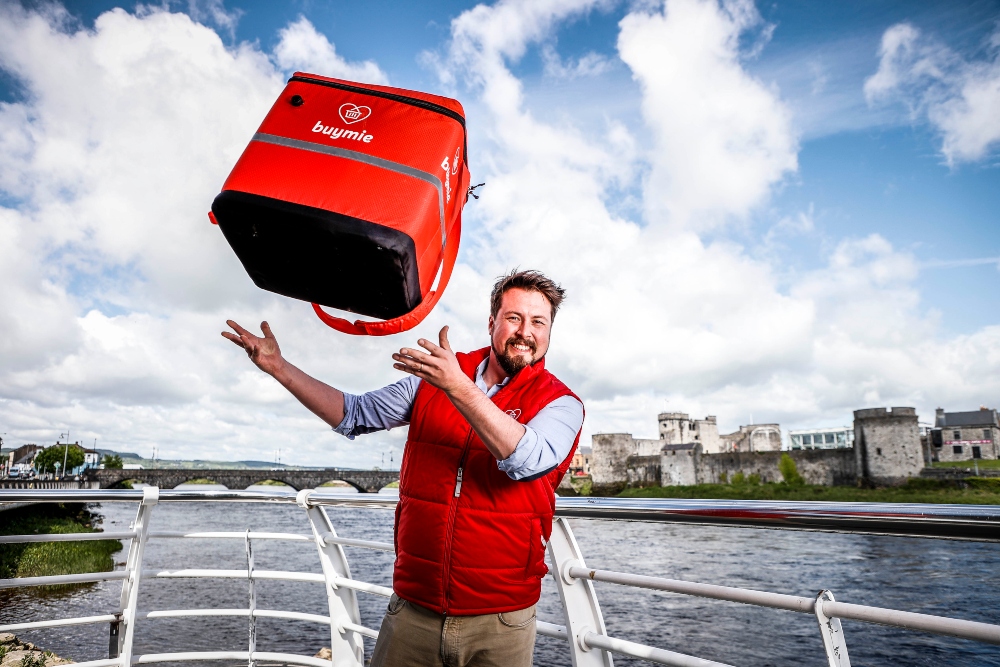 “The reality is not all retailers are created equally, many of them have vastly different infrastructures and are at various stages of the e-commerce maturity journey”

But things are changing even more. If you look more closely at how Buymie is developing– particularly the deal with Asda – where a ‘powered by Buymie’ solution entered the fray to enable the retailer to offer within the hour deliveries using AI technology, the Irish company is gradually becoming an enterprise infrastructure vendor to retail giants.

“You know ‘powered by’ had been in my head for quite some time. But the timing of how and when we deploy that kind of capability was really important. I’m a firm believer in not building anything unless you validate that there’s a demand for it. Asda was the first retailer to ask for the ‘powered by’ solution to be built. And so we built it within three months. Our team executed incredibly efficiently and incredibly well during that period to have the capability spun out and sold. We now have the ability to have up to 1,000 ‘powered by’ apps sitting on our infrastructure because we’ve re-engineered our architecture to allow for multi-tenancy.

“And so this is a step change and it’s been driven by a lot of learnings we gained by working closer with our retail partners, listening to the challenges they have. The reality is not all retailers are created equally, many of them have vastly different infrastructures and are at various stages of the e-commerce maturity journey. So what we’ve done is build an infrastructure that is flexible enough to plug into different retailers’ systems no matter where they are at on their e-commerce journey and provide value and reduce costs.”

The clincher? “They have this dedicated digital acquisition channel providing a service that they’ve never been able to do before. And they can do it profitably and at scale.”

Hughes’ vision for Buymie is for it to become a vital distribution network for retailers with myriad supply chain and ERP systems to simply plug into to do cutting edge e-commerce things, like same hour delivery. “Think of us like a retail equivalent of the electricity grid.”

The nearest comparison for what Buymie is in the US is Instacart while on mainland Europe Italian player Everli is making gains in Italy, France,Germany, Romania and Poland. Crucially, Buymie sees its path to growth in the UK and mainland European markets where e-commerce maturity is still ongoing. 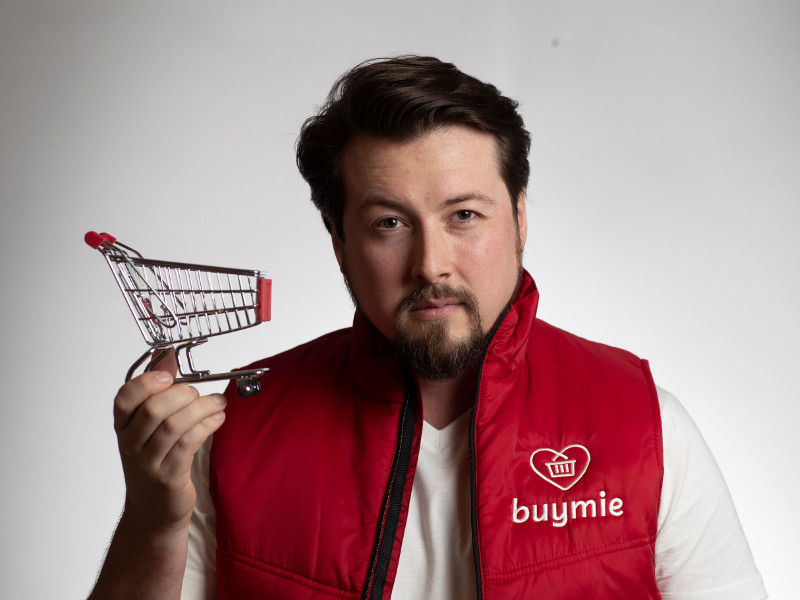 “My biggest piece of advice for any entrepreneur is ideas are totally worthless, execution is everything”

In terms of the Irish start-up space, the country now boasts six unicorn companies valued at more than $1bn including Fenergo, LetsGetChecked, Workhuman, Flipdish, Intercom and most recently Wayflyer. As well as there is Stripe, the payments technology business founded by John and Patrick Collison in San Francisco that is worth $95bn.

I ask Hughes if he believes Buymie will soon join the ranks of unicorns. “We certainly have huge ambitions for the business. I try not to spend too much time thinking about valuations. It’s easy to take capital and attach a value to a business. I think what we’ve tried to do is be fairly balanced in how we approach raising funds. We’re a deeply capital efficient business. We went profitable on a per order basis last year, so good economic was a big focus for us. We will be raising capital, we’re going to continue developing our funding strategy. The valuation will be what the valuation is. I’m less concerned about that and more focused on trying to build a really great and scalable business.”

Put simply Hughes is excited by Buymie’s present trajectory, but he wants to ensure it is sustainable.

Buymie is Hughes’ fifth attempt at starting a business and he’s not afraid to admit that previous failures were hard on him personally.

“The thing I’ve learn the most is how important it is to have really great people in the trenches with you. We have a real mission-driven approach within the business and a really great culture of achieving the mission and going the extra mile.”

He says managing stress and looking after his mental health and overall wellbeing become very important as the business began to scale and he is quite candid about the fact that he goes to therapy. “I started doing therapy on a regular basis every two weeks, specifically carving out time in my week to just work through the things that I was dealing with, the relationships I was managing and the expectations that we were setting.”

They say it is lonely at the top and a recent interviewee Fintan McGovern mentioned the “loneliness of command.” The reality for many founders of fast-growing companies, particularly so-called sexy tech start-ups, however, is that leaders are walking a fine line between growing the business, motivating colleagues, raising additional capital and at the same time ensuring that objectives set by the board and shareholders are met.

“You have to have a dose of a healthy amount of enthusiasm so that people know it is achievable, it is doable, but also that you it’s that this is a serious business and we need to be focused and make sure that it gets done. So there’s a very fine balance that you need to approach. For me, transparency is incredibly important and making sure the team have access to company information. We do a monthly town hall where we delve into the nitty gritty details in terms of financial performance and achieving the unit economics on a per basket basis. It’s about making sure that everyone has the big picture even when focusing on their individual tasks.”

The future of entrepreneurship 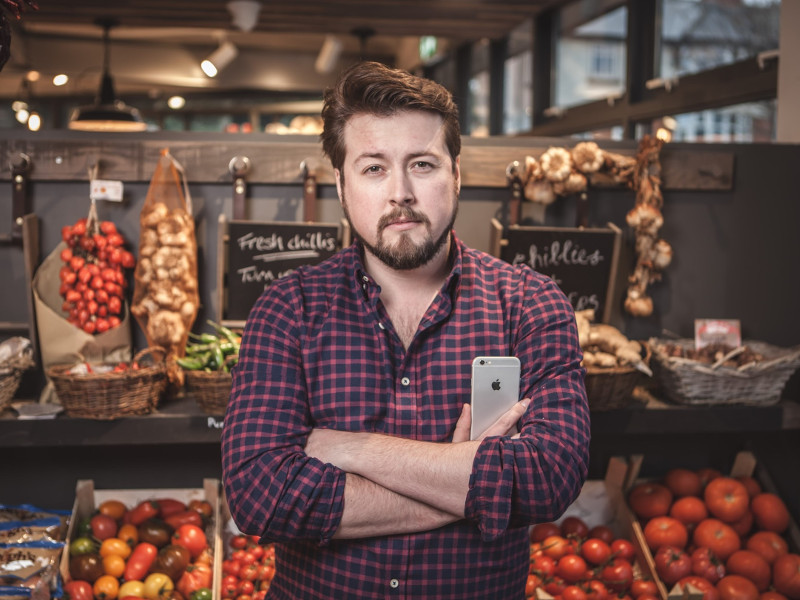 “Being an entrepreneur is not something you are born with. Entrepreneurship is muscle. It’s something that you have to practice”

Hughes says that the entrepreneurial landscape in Ireland has come a long way.

“This is my fifth business and I’ve had four failed businesses before this that no one’s ever heard of or ever will. But they’ve been vastly important to me because everything I’ve done since has been derivative of the lessons I learned through those earlier businesses.”

He hopes that the present environment of successful start-ups and ranks of unicorns will result in founders investing back into the Irish ecosystem. “I think its going to be really exciting to see the impact in another 10 years of these businesses and the cash that’s going to come back in, but also the lessons learned from previous entrepreneurs so you can avoid potholes.

“My biggest piece of advice for any entrepreneur is ideas are totally worthless, execution is everything. So get out there and talk about the idea you have because it’s probably not the one and you’ll need a few others and if it is the one, it doesn’t matter because 90% of people can’t execute. So get out there and watch people try to burst your bubble and have your idea validated. Really plug into the community and environment.”

To succeed as an entrepreneur, Hughes says, takes grit and the average number of failed businesses for entrepreneurs is actually seven. “My first failure was probably the hardest. It was super personal and I probably kept it alive for eight months longer than it needed to be. You need to get comfortable with failure.”

One of his most poignant memories before starting Buymie was waiting on money to arrive in his bank account after he paid payroll. “I was sitting in a Starbucks in Florida refreshing the bank account, waiting for this money to land. And I was sitting there having a coffee with failure like he was an old friend.

“Failing is not fatal. And failure is a natural part of any process of trying to learn your craft. Being an entrepreneur is not something you are born with. Entrepreneurship is muscle. It’s something that you have to practice. The more you practice the more muscle memory kicks in and the better you get at the process of validation, of execution, of structure. And these are skills that you learn – they’re not something you are born with.”

Women taking career breaks due to lack of flexible working 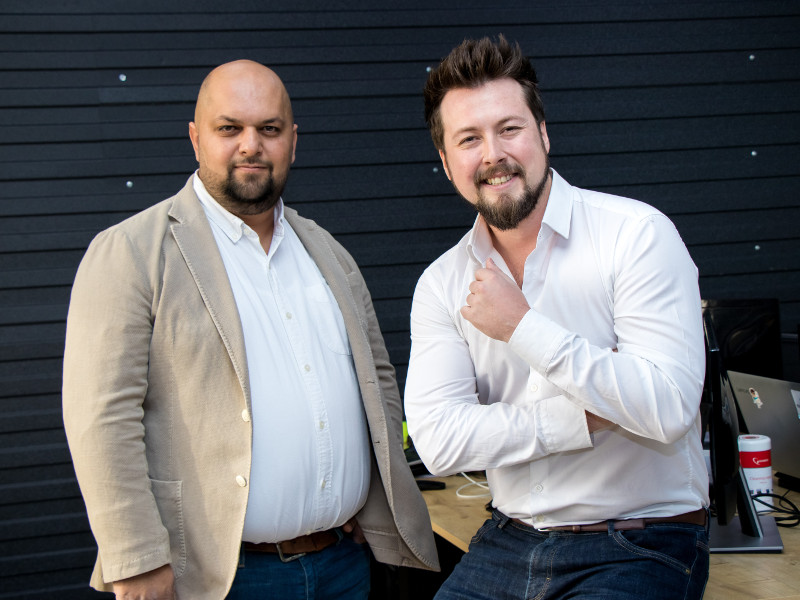 Covid-19 spurs Buymie to hire 200 personal shoppers and expands into UK as part of joint-venture with Co-op.