From the number of homes built to the amount of cattle on the island, the Central Statistics Office reveals a changing Ireland.

The numbers paint an interesting picture of how Ireland has emerged from the pandemic. They complement the latest exchequer figures that show Ireland has achieved a €5bn exchequer surplus. This is a €12.4bn swing from the €7.4bn deficit recorded in 2021, which reflects both the strong growth in tax revenue and the decline in Covid-related public expenditure.

Here are some of the top figures:

The 2022 highlights, based, based on data published by the CSO throughout 2022 up to 14 December 2022, is divided up under the following topics: Prices; Housing; Economy; Travel & Tourism; and Agriculture.

Other CSO releases also track changes in energy prices and the origins of the current costs to consumers can be seen in figures dating back to 2021 in the Wholesale Price Index (WPI). CSO data shows there were very large increases in wholesale electricity prices during 2021, with prices up more than 260% compared with the 2020 average. Other wholesale energy fuels also increased in price, and the index for all energy products was up by almost 161% on 2020. While wholesale energy prices continued to rise throughout most of 2022, wholesale electricity prices were almost 37% lower in October 2022 than in October 2021 – the lowest level for the past 12 months. Also, worth noting were some of the most significant changes in producer prices for food products over the 12 months to October 2022 such as Dairy Products (+51%), Fish & Fish Products (+21%), and Fruit & Vegetables (+16%).

Wholesale prices also influence construction costs. The most recent WPI release said the most notable increases in costs in the Construction sector were in Fabricated Metal which rose by almost 57% over the 12 months to October 2022, and the cost of PVC pipes and fittings, used in part by the plumbing industry, also rose by 28% over the same period.

There was an annual decrease of 41% in the total number of dwelling units approved in Q3 2022 compared with Q3 2021. The figures published in December showed that housing units accounted for 65% of all dwelling units approved, while apartments made up the remaining 35%. In the 12 months to September 2022, the number of multi-development houses that had received planning permission rose by than 15%, compared with a drop of more than 18% in one-off houses.

In September, the national property index had reached the value of 167.8, which was 2.6% above its highest level at the peak of the property boom in April 2007. The most recent national Residential Property Price Index (RPPI) published in December put the median price or mid-point price of a dwelling purchased in the 12 months to October 2022 at €300,000, with the lowest median price at €148,000 recorded in Longford and the highest median price of €620,000 in Dún Laoghaire-Rathdown. The most expensive Eircode area over the last 12 months to October 2022 was A94 ‘Blackrock’, with a median price of €732,500, while F35 ‘Ballyhaunis’ was the least expensive at €124,500.

Figures published in December showed that Gross Domestic Product (GDP) was estimated to have increased by 2.3% in Q3 2022. For Gross National Product (GNP) – a measure of economic activity that excludes the profits of multinationals – a decline of 2.2% was estimated for the quarter. The multinational-dominated sectors accounted for almost 56% of total value added in the economy in Q3 2022, while all other sectors made up 44%. Results for the first nine months of 2022 (January to September 2022) compared with the equivalent period of 2021 showed GDP increased by 11.7%, personal spending rose by 7.2%, while Modified Domestic Demand, a broad measure of underlying domestic activity and spending, grew by 10.1% over the same period.

A separate release published in November also showed that almost half (48%) of taxes in 2021 were generated from taxes on income. This included income tax amounting to €23bn and corporation tax of €15bn. Taxes on products accounted for 28% of taxes, including VAT of €17bn and excise duties of €6bn. Corporation tax receipts almost doubled in the last five years from €8bn in 2017 to €15bn in 2021.

In December, the CSO published Ireland’s Trade in Goods for 2021, which showed that we exported more than €165bn of goods and imported almost €104bn. Exports of Chemicals & Related Products accounted for 62% of total exports, with a value of almost €103bn. While we sent the EU more than €61bn of our exports, the US was the largest single export partner with exports of €52bn. Our biggest import partner in 2021 was the UK at €19.5bn of our imports.

Goods Exports and Imports published in February showed the value of imports rose to €103.8bn in 2021, which was the first-time imports exceeded the €100bn mark in a single year. The year 2021 had the highest level of exports and imports on record. The USA was the largest export destination in 2021, accounting for €52.5bn or 32% of total exports. Separate figures also showed that the USA was the biggest ultimate investor in Ireland in 2020, accounting for more than €800bn of our inward Foreign Direct Investment (FDI) positions.

The number of vessels arriving in Irish ports and the gross tonnage of all arriving vessels in 2021 both increased by 7% compared with 2020. Irish ports handled nearly 54 million tonnes of goods in 2021 – up 5% on 2020.

According to a release in June, while overall labour productivity in 2020 increased by 14.1%, labour productivity was down -56% in Transport and -9% for Accommodation & Food, two of the sectors most impacted by COVID-19. Due to prolonged lockdowns and restrictions on opening hours associated with the pandemic, the Transport and Accommodation & Food sectors were among the least productive in 2020.

Business Demography in July showed the pandemic had the biggest effect on the Accommodation & Food Service Activities sector, which had a decrease of 29.1% in persons engaged.

The pandemic had a notable effect on the Retail Sales Index (RSI) in Ireland in 2020, with the highest seasonally adjusted monthly decrease in the volume of retail sales in April (-37.3%) related to the first lockdown, followed by a sharp recovery in May 2020 (+29.8%) and June 2020 (+36.6%) as the country re-opened.

A release published in December showed how firms responded to the pandemic, as we saw that 15% of enterprises experienced an increase in sales via websites or apps in 2022 due to the pandemic. In 2022, one in ten set up a website to facilitate online sales while 12% provided a “click & collect” service. More than one-third (35%) of enterprises received orders via websites or apps from customers located in Ireland in 2022.

While 40% of enterprises had difficulty sourcing raw materials or intermediate products from suppliers abroad due to COVID-19 in 2020, more than half (54%) had been impacted by increased regulatory burden due to Brexit.

The aviation industry was one of the hardest hit by the pandemic, but there are signs of recovery. More than 13.8m passengers passed through the main Irish airports in the first half of 2022, which was more than 12.8m more passengers than those using the airports in the first half of 2021. However, while 1.1m more passengers used Dublin airport in October 2022 when compared with October 2021, this was 200,000 fewer than the same month in 2019 (pre-pandemic). More than 9.1m passengers passed through our main airports between April and June (Q2) 2022, which was 13% lower when compared with the same period in 2019. During the same period, Dublin airport handled 84% of all flights (55,479), while Cork handled 7% of all flights (4,822).

The December Transport Bulletin showed that public transport journeys have increased since the lifting of COVID-19 restrictions and now match pre-pandemic numbers. In fact, the number of bus journeys outside Dublin exceeded pre-pandemic 2019 levels for the same month, while car traffic count data remained only slightly below 2019 figures.

During the first six months of 2022, we made 6.6m domestic same-day visits. During April, May, and June (Q2) 2022, we spent €762m on domestic overnight trips with those on holiday spending €482m of this, while those visiting friends or relatives spent €117m. There were 2.2m outbound overnight trips taken during the same period by Irish residents, who spent €2.3bn.

Fertiliser prices were of significant interest throughout 2022. In a release published in December, it was noted that the price of fertilisers experienced the largest increase of all inputs in 2022, with prices increasing by an average of 141%. However, the full impact of higher prices was allayed in 2022 by a reduction of 19% in the volume of fertilisers used on Irish farms. As a result, the cost of fertilisers was estimated to have increased by 97% to €1.2bn.

The South-West region in 2021 spent the most on fertilisers, accounting for 18% or €111m of the country’s total spend on fertilisers. The South-West region had the largest growth in Agricultural Operating Surplus in 2021 at €216m (+29%). The CSO’s final estimate of Agricultural Operating Surplus for 2021 showed an annual increase of 17.6% to €3.7bn.

There was increased production across certain crops such as wheat, oats, and barley in 2021 and the yield of potatoes increased from 33.8 tonnes per hectare to 45.6 tonnes (+35.0%). 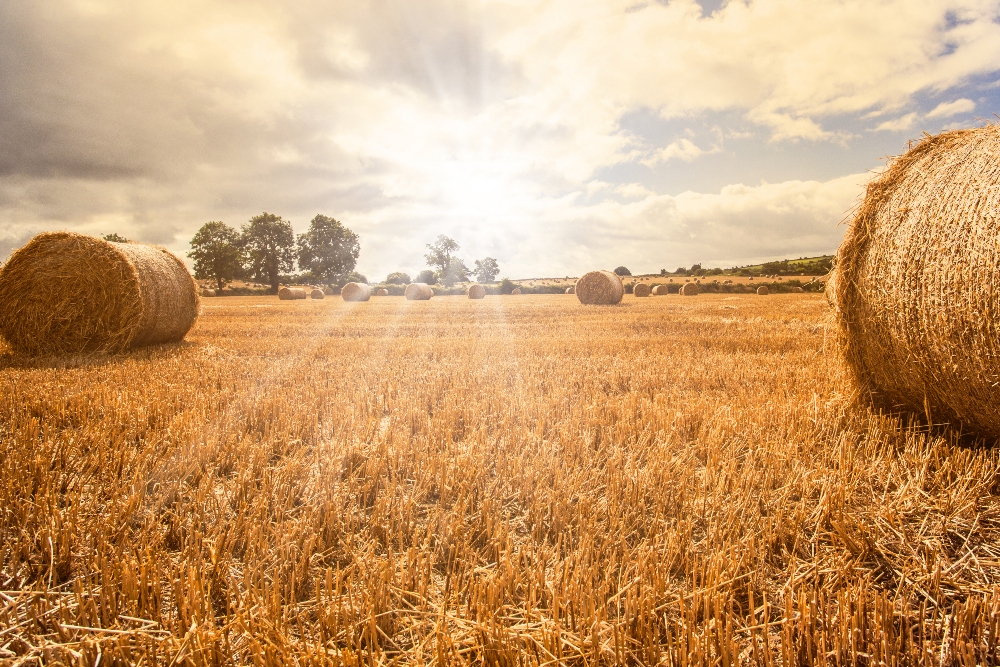 Irish agri performed strongly in H1 2022, but increased volatility of key commodities will determine the remainder of 2022, writes Eoin Lowry. Costs of Brexit, Covid and supply chain constraints are all adding up and putting pressure on Irish food and drinks businesses.