With more than 56,000 Twitter followers, social media expert entrepreneur Samantha Kelly aka @TweetingGoddess fizzles with energy and enthusiasm. She actually comes across genuinely as positive in person as the positivity she exudes when she encourages fellow women entrepreneurs to go for it.

But listen closer and you realise she’s no stranger to the hard knocks, is honest about her challenges, and perhaps that’s where she gets her empathy from. Nothing is dressed up, she just tells it like it is. And the crucial lesson? There is no perfect time or age to start a business.

“I discovered to my delight that I had a good knack for connecting with people, especially on Twitter in particular”

“I always say my story happened by accident. But I suppose you know things don’t really happen by accident. I started a different business called Funky Goddess in 2011. My dad had just passed away, my marriage had broken up and I had just hit 40. My daughter, who has a hearing disability, was just about to start mainstream school.”

Gifted with the gab

Her first business Funky Goddess was a start-up focused on creating period starter kits for girls. “My other daughter came to that awkward milestone of womanhood and so I went to the pharmacy to try and find her something nice to gift her and I saw no beginner sets for girls. So I decided that maybe I could do this? Even though I had no money, I had no business experience but felt that maybe if I need this then other moms and dads need this. So that’s how it all started.”

Kelly was new to social media and her sister suggested she try out Twitter to market her business. “I discovered to my delight that I had a good knack for connecting with people, especially on Twitter in particular.”

Because Funky Goddess tackled what was pretty much a taboo subject in media, Kelly was in high demand and her profile kept rising. “Everybody wanted me on the telly and the radio and that was a help with sales, obviously.” 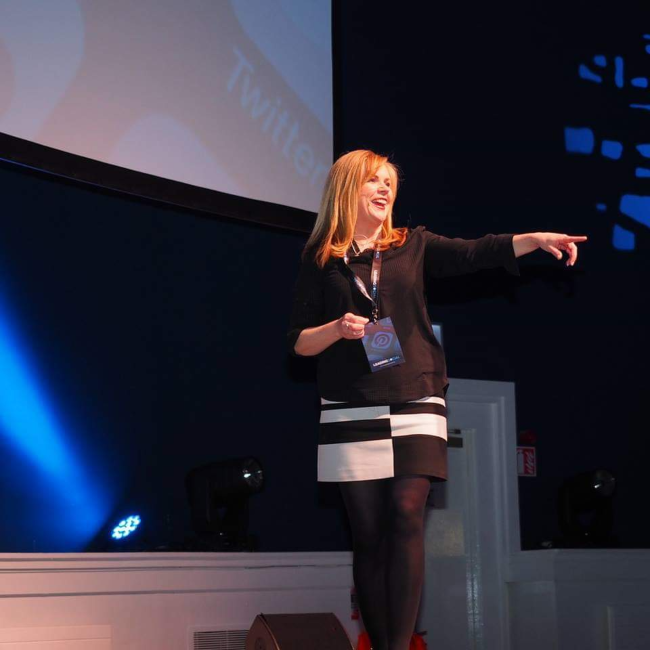 Kelly sold Funky Goddess to a customer. “I sold my first start-up, yay! And after that a company approached me, the Clayton Whites Hotel in Wexford actually, and said ‘you’re really good at this Twitter thing, would you teach us how to use it.’ And that was my first customer and I went, ‘oh, if people are willing to help me to help them manage their social media, maybe I have a business. And that’s how it [Tweeting Goddess] really got started.

Kelly very quickly made her mark. “The hotel’s head office rang and asked why their clicks were going up 15pc and they said ‘well, Samantha’s on the account.’ It was all because I was engaging and talking to their customers. That’s when I realised people are missing a trick here and I decided to share my knowledge. There are people to this day don’t really know how to use Twitter. It’s one of those platforms that baffles people, especially bigger companies. But I know it’s a powerful place if you want to build real business relationships and to especially build connections with like-minded people.”

Kelly also started the popular hashtag #irishbizparty which trended every week. “It’s about helping each other.

“What I was doing was actually building a real connection point for people who were out there on their own running businesses.”

What started as an idea for a Twitter community actually led to a full-blown conference and once again the power of community inspired Kelly to realise she was capable of anything.

“Women came up to me at the end of the conference telling me how I really inspired them and how they were thinking of starting a business but were a little bit afraid. I just said go for it, if it doesn’t work it doesn’t work. When I sold Funky Goddess I did feel a little bit of a failure. But actually I wasn’t a failure. I got the business to a stage where someone bought it off me and that’s a huge success. And it was about changing the mindset of people and not worrying about what others think as well. What others think of me is none of my business, that’s their stuff.”

Her recipe for entrepreneurial success? “Determination and having the right people around you.

“If you are confident you have a good business idea, go and do your research. Find out if it could be a viable business, talk to someone and get advice.”

Kelly is buzzing because she recently ran a successful edition of her annual Women Inspire Network conference entirely virtually because of Covid-19. “We had 297 people come to our conference online and I had speakers all over the world.”

And as the name suggests it is inspiring women entrepreneurs to challenge themselves. “There were a few people who came who asked me about doing their own conferences.”

And that is the point of what Kelly encourages others to believe: challenge yourself because you may be surprised by the results. “Once you have the know-how about something there may be a business there. If you have a talent and you are the go-to expert in your niche, become the go-to expert. Tell people you are the expert. And trust me, people will start coming to you.”

ThinkBusiness this year launched a new way of sharing business stories featuring a wonderful mix of entrepreneurs and business leaders shaping the future. Our podcast series is available on ThinkBusiness every week but also on our channels and via mobile apps on Spotify, SoundCloud, Stitcher and Apple.