Soon our city and towns’ streets will be busier than usual with e-scooter traffic. Thankfully, a young Irish firm will keep passengers and pedestrians alike safe from potential collisions.

Luna Systems is an up-and-coming Irish business that has developed clever artificial intelligence technology that combined with machine vision will help people riding scooters to avoid collisions with pedestrians, vehicles and more.

“The shared scooter industry is only four or five years old. That’s too fast for a modern city”

Electric bikes and e-scooters will be exempt from registration, tax or insurance if they not able to travel at speeds above 25km/h, the Government confirmed recently. The long-awaited Road Traffic and Roads Bill will legislate for e-bikes and e-scooters, which have become increasingly popular in recent years.

Very soon Irish towns and cities will see the onset of public e-scooters and e-bikes that consumers can unlock for a fee using their smartphones. Ireland is keen to avoid the mistakes of other European countries that saw streets littered with these vehicles.

Instead, local players like TIER, Zeus and Zipp Mobility that have already deployed scooters in cities across Europe, intend to bring a more structured roll-out of e-scooters with benefits for the environment if consumers can ditch their cars to get around cities.

But a key consideration is obviously safety and an e-scooter even travelling at 10km/h could seriously injure a rider or pedestrian if not properly managed.

To prevent this, Luna’s technology will be instrumental.

Luna emerged from the Intel-Movidius ‘Edge AI’ accelerator programme in DCU Alpha in 2019, as a joint innovation project between Taoglas and Transpoco. Luna, now a standalone company, provides Smart City and IoT solutions to better manage deployment and operation of shared micromobility fleets. Luna’s flagship centimetre-level accurate GPS technology introduces a level of precision that allows operators and cities to control parking decisions by riders, in a manner that will eliminate street clutter.

“The shared scooter industry is only four or five years old. That’s too fast for a modern town city,” notes Andrew Fleury, CEO of Luna. “A lot of modern cities have been shaped by the car, which has had a 90-year or so headstart.”

“Bike lanes and e-scooters tick a lot of boxes. They promote active travel, they can stretch out public transport networks. But the only challenge that remains is safety.

“And that’s what we’re trying to what we’re trying to address as Luna. So we have a camera that goes on to the vehicle. And it detects what riding surface the vehicle is on, be it a footpath or a bike lane, is it on the road, is there another surface, and we also detect pedestrians, we detect collisions and tackle those things. It’s very similar to the technology that you’d get if you bought a new car. We’re trying to do that for bikes and scooters.”

I put it to Fleury that Ireland is a good bit behind other European countries that have had e-scooters for some time now. Yes, private e-scooters are on the streets, but public e-scooter services have yet to launch. Is this an advantage or a disadvantage?

“At the end of the day, there might be some advantages to that, you know, because there’s a lot of learnings that have already happened. And yeah, ultimately, I hope to see much more shared vehicles on our streets going forward.”

Fleury cut his teeth in future mobility technologies while in college and focused mainly on vehicle transport. But when micro-mobility in the form of scooters came around and business models began to emerge around disposable street scooters that people could hire, he was fascinated.

“At first people were putting these out there without having any plan. People were literally disposing of them and leaving them anywhere. It was a brand new thing and no one really had figured out the operating models.

“And then we looked at it and thought, Okay, this is really interesting. And we sort of took a strategic decision to say, well, we’ll solve those first two problems, the disposable scooters and the operating model, we will bet that they can fix those two issues. And we’ll jump to question three on the exam paper, which is, these things are going to have to be safe, right?

“The two real big problems are people going on a footpath or a sidewalk, and then people parking them badly. So Luna started off looking at those two problems. And then we said, ‘Okay, how do we do it?’ It took us a little bit of time to work out what was the right technology?

“We’ve been working in collaboration with most of the big operators in in the space. Because it’s important to kind of understand, okay, how is this going to be deployed? What kind of data does it need to collect all of the interfaces and things like that, and then also, the industry is moving as we go, right?

“So if I go back a little bit to the Wild West, Paris is a really good example. When scooters were first on the scene there was 27 different scooter operators. And as you can imagine, with 27 it was total chaos, nobody could kind of really run a sustainable business. So Paris kicked everybody out and said, ‘Okay, we’re going to run a tender process and then we’re going to give a license to three operators. So that is kind of the model of what’s happening now in the industry.”

The magic behind Luna’s offering is the AI combined with machine vision. But in the mix is also a vision for smooth flowing cities.

“That’s the mission for Luna. We see a world where we just don’t need all this traffic in the cities. And what’s holding us back, right? If you take a bike or an e-bike or a scooter, you’re gonna go faster than a Tesla in terms of traveling through the city. It’s greater for sure. Most of times there’s one person in the car. And then really just the last question, and that’s what holds people back from cycling and things like that in Europe environment as well: is it safer? And if we could get that part right I think it will move quite quickly that there’ll be a snowball effect. Once you just get over a certain percentage of population and everybody will do it.”

The key of course is the technology to ensure e-scooter riders don’t injure themselves or others. That’s where AI combined with machine vision comes into it.

“So yeah, it’s the same area of technology [as cars]. But accident avoidance in a car and on a bike are quite different. In a car, you can apply emergency braking, you can do different things like that. So yeah, we definitely we see ourselves committed to the car-free journey,” Fleury said.

3 tips to boost your productivity AI scooters to roll out across DCU’s Dublin campuses

In a world-first, a fleet of artificially intelligent e-scooters with computer vision will be rolled out to Dublin City University staff and campus companies. A journey to make e-scooters safe for the public as well as their riders. 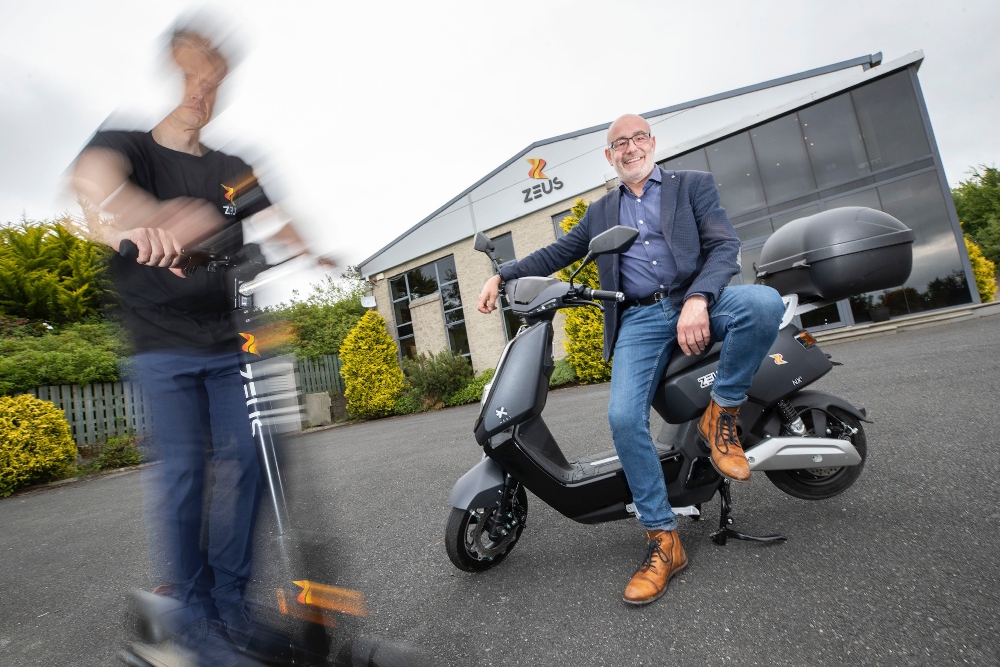 Young business primed to influence the future of transport in cities around the world.