A rising star on the Northern Ireland entrepreneurial scene, James Blake of Vindicta has learned how to win at business by embracing vulnerability, resilience and authenticity.

A few months ago, a LinkedIn post caught a lot of people’s attention. In the post, a young businessperson called James Blake spoke about trying to build a business while at the same time dealing with the double-whammy of losing his dad quite suddenly and looking after a disabled sibling who had suffered two strokes and required 24/7 care.

Despite all of this, his fledgling business, an SEO firm in Northern Ireland called Vindicta Digital, was succeeding. “I am writing this to say, regardless of the challenges life throws at you … don’t give up. Keep pushing!”

“I believe having the ability to appear vulnerable, open and honest whilst appearing strong is one of the most incredible things that a business leader has in their arsenal of tools”

In the face of grief and trauma Blake persevered and he and his colleagues had built a business that generated £18m for clients, and last year he was nominated among the top five young businesspeople of the year in Northern Ireland.

I feel that most people would tend to think showing vulnerabilities in all aspects of life especially business tends to make the them appear weak or unapproachable. People will do anything to hide their vulnerabilities, which leads to issues further down the line. It’s a strange thing that this is the case, especially when we all tend to absolutely love those who are courageous enough to be real and upfront about things.

I believe having the ability to appear vulnerable, open and honest whilst appearing strong is one of the most incredible things that a business leader has in their arsenal of tools.

You can talk about hundreds of leadership components all day long, but I wholeheartedly believe that the ability to show off past wounds and downfalls whilst remaining positive and strong is the ultimate source of motivation for your peers, staff and potential clients/business partners.

Being vulnerable and having vulnerabilities and bad things happen to you doesn’t mean that you have failed.  I believe failure in its truest form is not a thing.  Not to me anyway.

You cannot fail at anything including life if you simply refuse to give up. Everything that happens between birth and death is a series of events, challenges, successes and growth. There is no failure unless we decide to throw in the towel and leave it there.

If we do not embrace our vulnerabilities and scars, we will ultimately waste a ton of our energy in trying to hide our perceived “weaknesses”. The wounds get buried deeper, creating a negative mindframe, defensiveness and death of creativity and innovation.

Our journeys are all exciting and enthralling in their own way and we all have our battle wounds. Hiding these and trying to portray an image of being perfectly polished is only compressing who we are.

It stops people from engaging with us on a deeper level, a whole other level of human connection because at the end of the day, that’s what we all are and that’s how we operate.

I started Vindicta Digital on a shoe-string budget with my last pay cheque nearly four years ago and since then the business has blossomed.

At the beginning when many had seen me as a 23-year-old with no idea what he was doing ( I probably didn’t know as much as I thought I did) there were those that looked at me and could sense the pure passion for business and success within me.

I very quickly built a good following on LinkedIn early on in my business journey and these people refused to see anything but a young entrepreneur who was chasing his dream and stopping at nothing to achieve it.

Fast forward to now and the business I started four years ago has blossomed incredibly. Each year revenue has more than doubled, we have over 120 clients globally, we have a list of celebrity clients, we’ve expanded into key locations in mainland Britain and we have an ever expanding team with CVs landing on our desks everyday from web developers, freelancers and the likes.

This year we should bring in over £40m in online revenue for our clients.

“I put up the post to help others, to enable people to see that behind the professional profile picture, the daily motivational updates and success stories that I was a real person who had my own challenges and tribulations. throughout my journey”

The journey, however, hasn’t been so easy and I decided that I would share this with my growing Linkedin community; the people who have supported my personal growth and the company’s growth since day one..

I only shared a snippet of the last couple of years.

I decided after a hellish couple of years in my personal life. Very dark times, an experience of loneliness that I never felt before and the experience of being the closest I have ever been to actually giving up and throwing in the towel with everything, not just business. 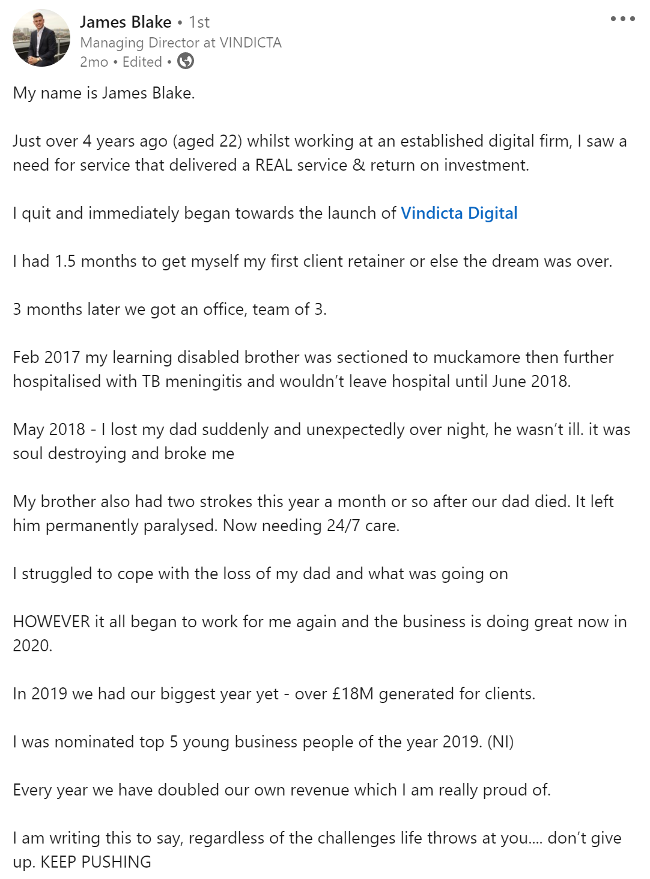 As the post read, in 2017 my older brother who had severe learning disabilities became extremely ill and was hospitalised for nearly a full year. He had meningitis, TB and at one point was on palliative care this was a rollercoaster for our family and it was horrific to watch the illness take hold of him.

Even though he has learning disabilities and that came with its challenges for home life and growing up, he was always on his feet doing something and laughing. Seeing him that ill was horrendous.

My brother was still in hospital and thankfully was on the mend around a year later in May 2018 when I woke up on a Sunday morning to missed calls and texts from my other brother: “Dad’s in Royal – get here.”

I remember waking up confused throwing on jeans and t-shirt, hitting the road, speeding, I don’t know how fast I went but it was fast. I got to the hospital, met my brother at the door and I instantly knew my dad was gone.

I collapsed, broke down in the car park and can’t remember much after that except for holding my dad’s cold hand, sobbing on his stomach asking him to wake up.

My dad wasn’t ill, he was fine. I had seen him the day before. This just wasn’t fair. He passed away suddenly from an aneurysm just before him and my mum were to go to dinner. About a month after my dad died, my brother then had two strokes within the same amount of weeks.

My whole world was falling apart at the same time, two weeks after my dad passed, I was in the office handling business, managing projects, meeting clients. I was flying into England every other week for meetings and working as if nothing had just happened.
Meanwhile inside I was tormented, heartbroken, alone and scared.

I’ll not go through the details but a very tough year ensued.

Business productivity took a short term hit as some days I couldn’t make it out of my house and would lock myself in alone.

My team were great and continued to work on-through which I am so thankful and grateful for.

Anyway, I made it through. I came out the other end and no doubt I know my dad is proud of me. Business is more successful than ever. My brother is now living in assisted care and is wheelchair-bound for the rest of his life. He receives 24/7 care, but he is still with us.

I put up the post to help others, to enable people to see that behind the professional profile picture, the daily motivational updates and success stories that I was a real person who had my own challenges and tribulations. throughout my journey.

In my mind, if the post helped just one person out of the large following I have on Linkedin then I would be happy.  I know the loneliest that comes

The post reached over 1.2 m people within three weeks. It was shared thousands of times and I received hundreds of messages from people who had read the message and decided to power on through whatever they were going through because I had helped motivate them.

Our business received countless new enquires from people who wanted to work with me and our team due to the fact they could tell I was an open and honest person and I received comments of respect and admiration from my peers, team members and friends.

I have now got a large following of supporters on Linkedin who are motivated daily by seeing me progress with my endeavours as they now know the person behind it all, they know the struggles and they can either relate or take motivation from it.

I can honestly say I am so thankful and grateful for every single one of the Linkedin community and that posting that actually helped me too.

It helped me unload a vulnerability and a self-perceived weakness/tale of hardship that actually became a super strength.

A new era for Donegal’s Women in Business Network