Located close to the northern-most point in Ireland, the enterprising town of Carndonagh is already ahead of its own 5-year strategy to supercharge its local economy and that of the Inishowen Peninsula.

In December, Carndonagh emerged as one of the regional winners of the Bank of Ireland National Enterprise Town Awards (since renamed the Begin Together Awards as part of a wider €3m initiative), winning €3,000 in the process.

Not ones to miss an opportunity the town’s committee has already invested the winnings in revamping Carndonagh’s local Tourist Office and in doing so are three years ahead of their own targets contained in a 5-year development plan for the town.

“The winning of that regional award has given us so much courage, so much confidence. It wasn’t just the money, but the status of winning that mattered”

But look closer and it is clear there is a bigger dynamic at play that owes its roots to the community of business people banding together back in 2015 as part of the National Enterprise Town Awards and that bond is the impetus for a whole slew of initiatives to come from local currency to making Carndonagh one of the best locations in the country to achieve work-life balance.

In essence, the true spirit of Begin Together and what can be achieved through teamwork and ambition is amply evident in Carndonagh. 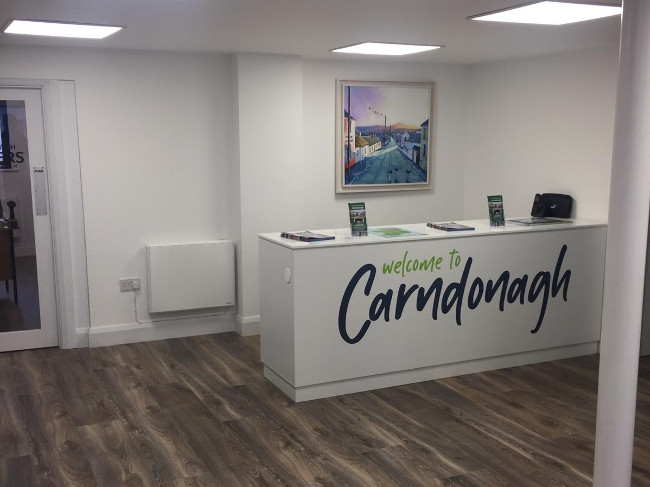 Located just under 20-kilometres from Malin Head, the northermost tip of the island of Ireland, Carndonagh sits strategically in the middle of the Inishowen Peninsula; a hub if you were to consider spokes reaching out to nearby towns like Ballyliffin, Buncrana, Muff, Moville and Culdaff.

Local businesswoman Deirdre Bradley explained that taking part in the Enterprise Towns showcase in 2015 was a trigger event. “I opened my own business five years ago next door to the Tourist Office and I would have worked with the local Chamber of Commerce and I was always very community-spirited. So when Jimmy Stafford from Bank of Ireland suggested we take part in the Enterprise Towns showcase in 2015 it got everything going and some people showcased their business having never done so before.”

Enterprise Towns in 2015 was the impetus for the founding of the Carndonagh Traders Association. 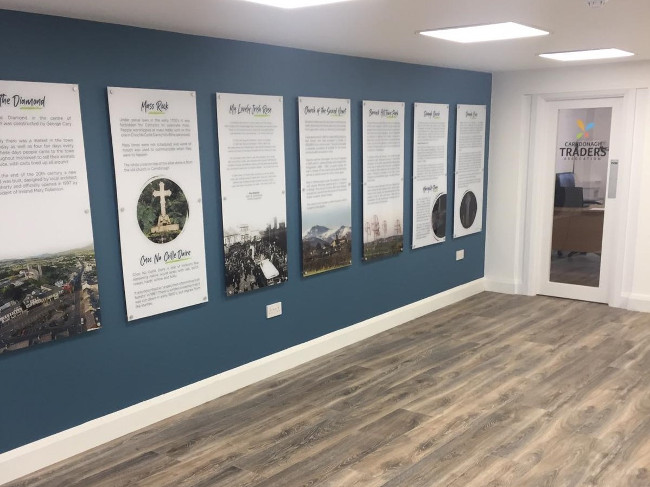 Things upped a gear significantly when the Irish Open golf tournament came to nearby Ballyliffin. “We discussed this amazing opportunity and said ‘look, this is an amazing event, we may never see it again. Do we sit here and do nothing?

“We decided we were going to get behind John Farren, manager of the golf club in Ballyliffin and one of the driving forces behind bringing the Irish Open to Ballyliffin. We called a meeting and 35 business owners came to the Convent Hall. John came in and gave us a breakdown of what was happening with the Irish Open and the very next day we set up the Carndonagh Traders Association. Within a few weeks 58 business owners had joined our ranks and we decided to hold a festival at the same time as the Irish Open.”

The festival showcased Carndonagh and brought plenty of business into the town but somehow a spark was ignited and all the members of the business group in one voice asked what’s next?

A second festival followed suit and the Carndonagh Traders Association were motivated and committed to working together to boost their town’s economy, devising a 5-year strategy for Carndonagh.

“We put a lot of effort into it and we presented to the NETA judges and they were very impressed, not only with the spirit of Carndonagh but also the large established businesses that we have here.” Key players in the local economy include Ashley Martin, a firm that provides shop fittings for retailers and pharmacies across the UK and Ireland as well as D4 Products which makes door components, to name a few. Other prominent local businesses with a high profile include Banba Coffee, Ireland’s most northerly coffee shop and bakery.

The Diamond is forever 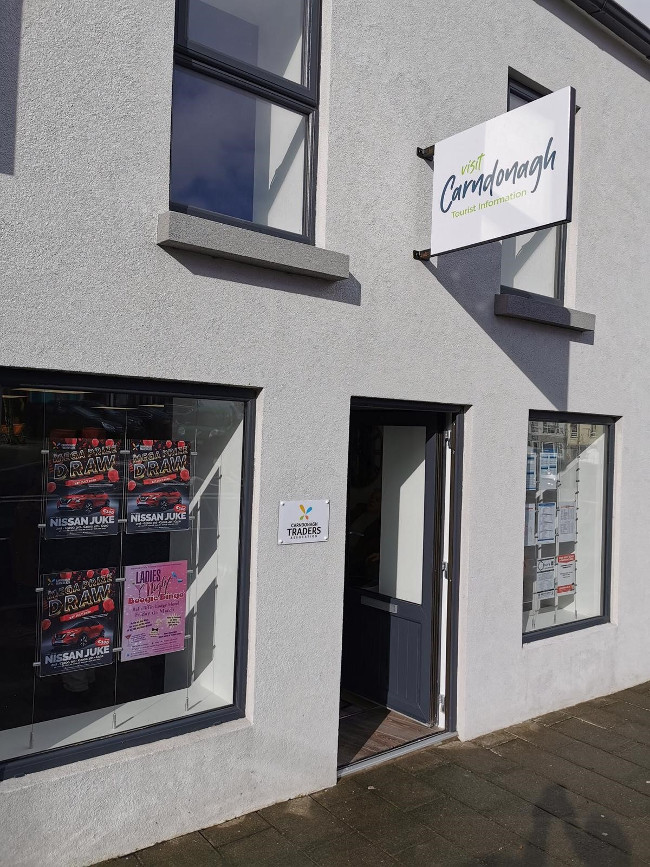 The Tourist Office in Carndonagh, located in a former electrical shop that had previously closed.

“We won the NETA regional award in December and that has spurred us on to redevelop the local Tourist Office which is on the Diamond at the centre of the town.”

“There’s no doubt that rural Ireland is struggling, but if we can get our regions to function as whole units that’s where all of this comes into play for us”

The Tourist Office is located in a former electrical shop that closed down a year and a half ago and was lying vacant. “It all came together quickly and everything we used to refurbish it and make it into a vibrant Tourist Office at the heart of Carndonagh was sourced locally.

“We have a five-year plan and the redevelopment of the Tourist Office was pegged for year three. However, winning the award and the confidence it gave us has really driven us all. We decided we would go ahead. We were just thrilled, really. The winning of that regional award has given us so much courage, so much confidence. It wasn’t just the money, but the status of winning that mattered.”

Bradley says the spark began in the meeting at the local Convent Hall in 2015 when 58 business owners joined forces. “Most of those businesses would never have worked together before. We were all used to business going out of the town and going to Derry rather than people using the services that were there. The Enterprise Towns showcase was a turning point.”

Now the strategy is about keeping business and money being spent in Carndonagh and the surrounding areas, not to mention promoting the region as a haven for work-life balance.

“We have a beautiful urban area around us as well as the Inishowen Peninsula and we would see this as the perfect place to work, live and play. We’re trying to nurture our very small-to-medium businesses and make sure they are sustainable. We work very closely with our local councillors who have been amazing and the next initiative is the creation of our own currency, Carndonagh Vouchers.

“We plan to invest in a kiosk to sell the cards and eventually encourage neighbouring towns Ballyliffin, Moville, Muff, Quigley’s Point and others to facilitate their uses. A lot of businesses could use them for paying Christmas bonuses, for example, and we have a lot of large, local employers who could support this because ultimately it means more people spending locally.

“All of this, the teamwork and the vision for Carndonagh goes back to how we banded together to take part in showcasing our town as an Enterprise Town.”

Jimmy Stafford, head of Operations and Enterprise at Bank of Ireland for Co Donegal, said that the awards have been a huge success for Donegal from a county perspective.

“For us to survive as a bank, we need our businesses to thrive. Because if the businesses are doing well in that locality, you need a bank there. Across Donegal as a whole, we see these towns like Buncrana and Carndonagh as pivotal to the future of the north-west.”

In one sentence Stafford crystalises the spirit of Begin Together: “There’s no doubt that rural Ireland is struggling, but if we can get our regions to function as whole units that’s where all of this comes into play for us.”

Kerry Group expansion proves Ireland a top investor in US