Meath firm Trimfold Envelopes’ Sanilope innovation could be a game-changer for the hospitality sector, locally and globally.

Necessity is the mother of invention and the clever creation of the trade-marked Sanilope – a sanitised envelope that lets restaurants reassure patrons with clean cutlery – by Meath firm Trimfold Envelopes could be just what the hospitality sector has been waiting for.

The Trim, Co Meath-based Trimfold Envelopes, which has been in operation since 1971 and next year celebrates its 50th anniversary, has come up with an ingenious solution to ensuring hygienic and safe dining in world shook by the Covid-19 pandemic.

“For customers of restaurants wouldn’t it be good to know and feel assured that your cutlery is safely sealed in a sanitised envelope?”

The company, which manufactures branded envelopes and packaging for a myriad of sectors including banking and government was, like all manufacturing businesses, impacted by the lockdown measures in March.

But through instinct, astute management and careful planning it not only maintained production and kept its business running, but has sparked upon a whole new pivot.

A safe solution for hospitality sector 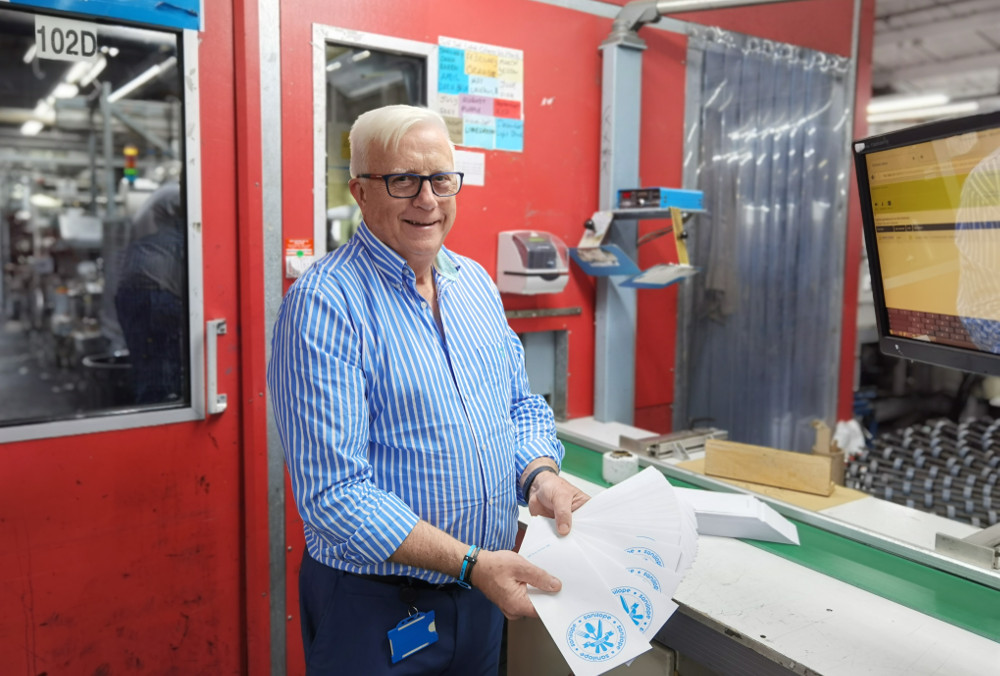 “The Sanilope began as an idea and it is something that is needed right now. It is of its time”

Trimfold Envelopes has begun production of a product called the Sanilope, envelopes coated in a specially-developed sanitising formulation that is applied to the paper during the manufacturing process.

The sanitised cutlery envelope allows venues to increase customer trust in the safety of the premises they are eating in and enhances employee safety when handling cutlery for customers.

The solution means cutlery can go directly from the dishwashing machine into an envelope and sealed-in along with condiments and napkins.

The Sanilope comes with a reassuringly thick paper and diners simply rip off a perforated section to access their cutlery.

Trimfold is a subsidiary of the Mayer Kuvert network of more than 50 manufacturing plants across Europe, which between them produce more than 45m envelopes a day.

The managing director of Trimfold Envelopes Eugene Healy told ThinkBusiness.ie that the Sanilope has so far been well-received in the market and customer wins so far include restaurants and a large hotel chain.

“Before Ireland went into lockdown, we could already see what was coming and we prepared as best we could. We were able to lock down the factory and ensure production continued safely for our staff.”

A solution for the next normal 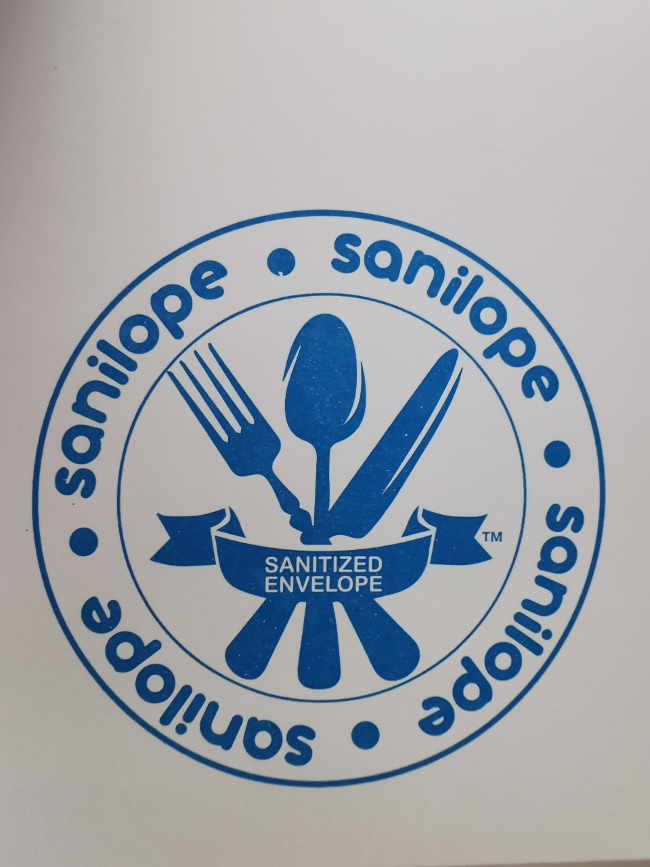 Like all manufacturing managers adjusting to the business realities of a locked-down world Healy had to think outside the box to ensure the viability of his business and struck upon the idea of the Sanilope.

And like most ideas it was a Eureka moment for Healy. “As the restaurants and hotels began to gradually open up, I myself still felt a bit uncomfortable going back into restaurants and the idea of cutlery sitting on the table.”

As a business owner, he knew instinctively that owner-managers of hospitality venues would also want to ensure customers felt safe. And the idea of putting cutlery into a sealed, coated envelope – the Sanilope – came about. 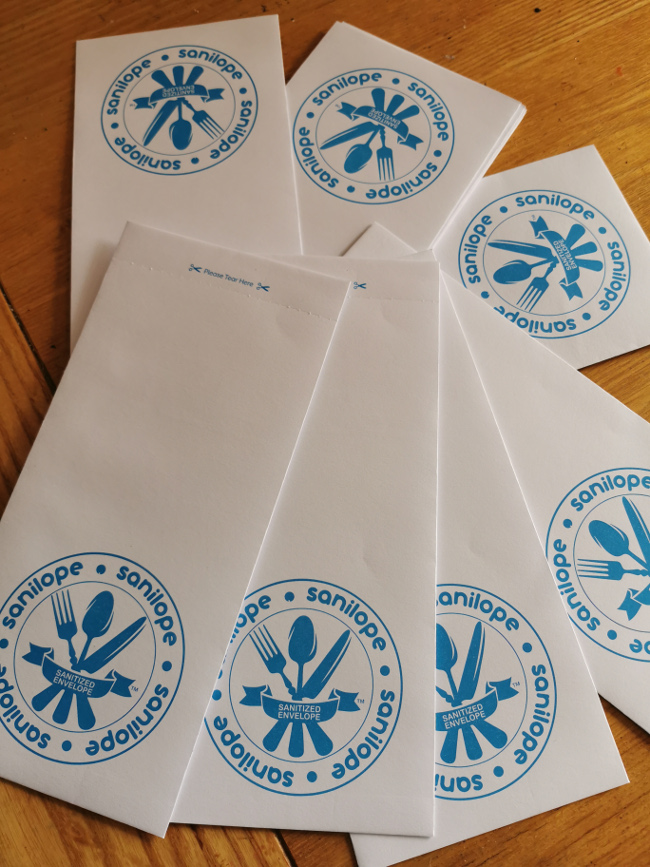 “I got in touch with various suppliers and wanted to see if it was possible to coat envelopes in a solution that would be mostly alcohol-based but without affecting the integrity of the packaging.”

Through old-fashioned ingenuity and on-the-ground research and development (R&D), the Sanilope went into production.

In effect, Healy and his colleagues created a whole new product line that now sits alongside existing product lines and that could also potentially open new export markets for Trimfold Envelopes.

“For customers of restaurants wouldn’t it be good to know and feel assured that your cutlery is safely sealed in a sanitised envelope?

“We worked on various versions and created various samples before coming up with the existing product.”

The Sanilope consists of thick white 120 gram sustainable (PEFC-certified) paper and is large enough to hold knives, forks, spoons, condiments and napkins. The sanitised coating also means that patrons can safely house their masks inside the Sanilope instead of resting them on a table.

“We see a myriad of applications for this, from cafes and restaurants to large hotels and catering firms. They can even be used by restaurants operating dark kitchens for home delivery to again make customers feel safe and reassured.” 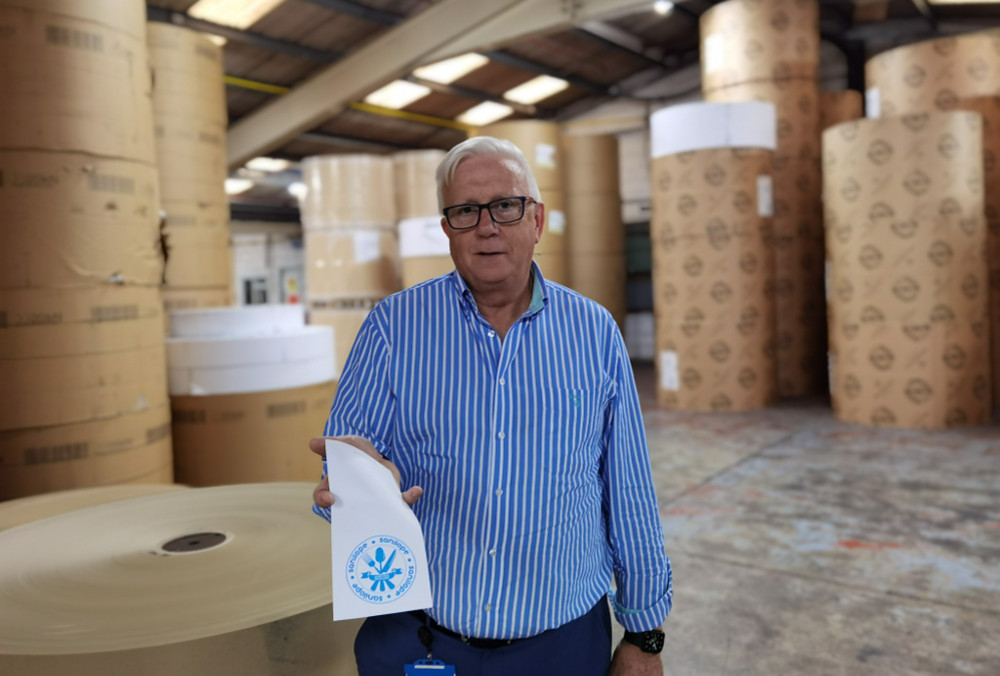 As well as producing the Sanilope in various shapes and sizes, Trimfold can also apply bespoke printing to allow venues to put their branding on the product.

Asked if he views the evolution of the trade-marked Sanilope being the origin of an export business, Healy said: “Most definitely. But it is also could be manufactured by our sister companies all over Europe.”

And crucially for Trimfold Envelopes, Healy is confident the Sanilope will help to maintain employment during a testing time for a regionally based manufacturer. “Maintaining jobs is more important than creating jobs right now.

“We do what we do for Ireland, on this island. If it goes beyond that, great. The Sanilope began as an idea and it is something that is needed right now. It is of its time.”

Employee burnout looms in Ireland, with women most at risk