There’s a new kid on the social media block – say hello to social audio. Samantha Kelly and Dave Irwin explain how it all works.

Social media has proven key to reaching a wider audience and showing you are the ‘Go To’ expert in your space – especially during the pandemic we saw a huge rise in the number of people who are attending online event and conducting business online.

I have clients who I haven’t even met in real life! The power of social media is finally getting the attention it deserves. Now there is a new kid on the block. Social Audio.

“If you are the ‘Go To’ expert in your niche, then I recommend you get on one of the social audio platforms and start sharing your knowledge and building relationships now”

Its popularity has probably risen as a result of people feeling isolated and needing that human connection. This is why I decided to jump in and give it a try. And oh my……I am hooked!

What is social audio?

Basically, its a way you can chat to people, but you don’t need to worry about what you look like as no one can see you. You create a profile and your profile picture comes up when you join a room or space. Topics can vary but most are business orientated or wellness or discussions about topics such as ‘How to grow your audience’ or ‘How to say no’ that type of thing.

The main platforms are Clubhouse and Twitter Spaces. However, there are others and one that sprung up recently is Greenroom by Spotify. Others include Fireside, Angle and Discord. Facebook has announced its version coming soon.

You can simply start by joining some of the rooms and listening. If you are invited to speak adding value is key as people can click on your profile and follow you if they like what you are talking about. This increases your followers and they will see you in rooms when browsing ‘the hallway.’

Clubhouse is the one that has been around the longest. The lovely thing about Clubhouse is that you can roam ‘The Hallway’ to see topics you might be interested in and then join in with a room. Once you join you might be invited to speak. One thing to be aware of is that your mic will be on when you go up to the stage to speak so make sure you mute immediately.

Once you are on stage you can click your mic to ‘clap’ or engage with a speaker who you feel is saying something cool.

What I normally do is I connect on Twitter and then add the person to a Twitter list called ‘Clubhouse cool folk’ or ‘Women of clubhouse’ to keep track of the new connections I have made.

When it comes to social audio, Clubhouse definitely has the first movers advantage. Being first in the space does come with some negatives. Originally Clubhouse was invite-only on Apple IOS.

Clubhouse would be considered one of the more stable social audio apps, it does frequently fail, kicking users out of the app and causing the app to crash. Clubhouse users have expressed frustration that they cannot record the conversations for posterity. Content creators such as podcasters and radio hosts have wanted the ability to record their rooms so they can use that content in the future. This makes many see Clubhouse as a waste of time.

I’ve found Clubhouse very active, and found interesting rooms and topics but most of all I have curated a nice list of people I find interesting and have built some nice relationships there. I even connected with a handful of really lovely people with whom I am now working! So for the time I spend there I have definitely got engagement and new business too.

If you are in a room that is interesting you can ‘Ping’ people into the room using the + icon on the bottom. You can also share the room to people who are not on Clubhouse. Sometimes they join when they see you are active there.

I started running Twitter Spaces called ‘A Cup of Tea’ just to get to know people and sometimes I run a Space around the topic of Twitter and I get a lot of traction and attendees for the Cup of Tea one, especially as I love to chat and get to know other peoples’ stories. As a result of the casual space my community there also come along to my Twitter topic spaces. I have found it a bit glitchy still as I am an Android user, but Twitter Spaces is my happy place. 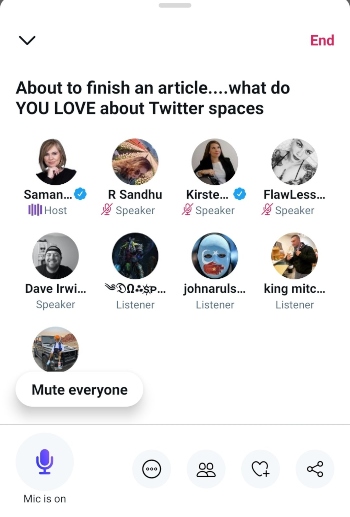 I can engage with speakers using the emojis to show appreciation or say hi to others in the room.

I can tweet it out direct to Twitter and schedule Twitter spaces for my 60,000 audience and I also don’t have to move away from my favourite platform!

The community in Twitter are a slightly older demographic and the conversations can be extremely educational and more business-orientated. My loyal following is growing too as a result of the Twitter Spaces I attend and also I just click on people’s photo to see their bio as it takes me straight to Twitter.

The Twitter Spaces engineers and the team are very engaged with users and they do help with issues and listen to our suggestions which I also like.

Sometimes they even join in the Twitter Space which is fun.

Advantages: One thing I love about Twitter spaces is if I am talking about something e.g. a photo or a poll etc I can pin it to the top of the Twitter space in the ‘nest’ and others can then see it or Retweet it if they like it.

When it first started there were some unclear pre-requisites that your Twitter account needed to have to be able to host a Space. Your user needed to have at least 600 followers. This left many users feeling left out, as they could join others spaced but not interact. There are frequent crashes, bugs, and issues with the Spaces feature. While too many to list here, more frequently reported stability issues include crashing the app, kicking people from the stage, audio going in and out, as well as hosts being unable to see people in their Space who are talking. Twitter does not have the best reputation when it comes to social media.

Disadvantages: There is too much history with the app, from the 2020 elections going all the way back to organised movements in 2008. Twitter has tried to distance itself from this reputation, but it has stuck around. Trolls are quite common on Spaces, with users coming up to speak and then taking over a space by playing loud music +-and disrupting ongoing conversations. Discoverability is pretty much non-existent on the app. Spaces does not have categories so while you can schedule a space, there is no way for someone to know it is scheduled unless they have the link. This means scheduled spaces cannot be saved to a calendar, or show up in list format within the app, until the space starts.

However, there is definitely more good than bad, for instance, I can change the topic as the topic can change during the conversation at the top of the Twitter Space. Another great point is the captions feature that dynamically generate as people are speaking in the Space. This accessibility feature definitely makes the application more accessible to users who may not be able to participate in other apps.

This launched recently and I still haven’t decided if I like or dislike it. I love meeting new people and have met some nice new folk who I have also encouraged to tweet more and I even got a tip from one person when I was sharing Twitter tips which was nice!

What I do is I find their Twitter handle and connect with them off the Greenroom app.

There apparently is a chat function, but I haven’t got that yet as I am an Android user. I also can’t put the link to my Twitter account.

Discoverability on Greenroom is locked to categories, and the categories available are very generic. Things like NFL, or Sports. This means that it can be quite difficult to find something you are interested in. For instance, there is no Politics section at this time, so finding a way to speak on less popular subjects is difficult. Lack of Android support has definitely been an issue for some users. As with other applications with Android, discoverability and Greenroom specific features like Gems don’t work on that platform.

Gem hoarding: Spotify has a unique way to track social proof on their app, in the form of profile Gems. This has led to some gamification of the app, with users giving “Gems for Gems” that falsify this social proof. Over saturation of rooms, which can make it seem like the larger rooms are a free for all. With limited categories, such as NFL or Content Creators, the rooms themselves tend to be quite large so it can be harder to be heard and contribute to a conversation.

If you are the ‘Go To’ expert in your niche, then I recommend you get on one of the social audio platforms and start sharing your knowledge and building relationships now. Other brands are already doing it. So check them out and be part of the global social audio revolution. No images to make, no lipstick and nice hair required, just your voice! See you there.

Samantha Kelly is also known as Tweeting Goddess and is the founder of the Women’s Inspire Network. Dave Irwin is owner of David Irwin Design, an identity design company working with new businesses on their brand strategy