It began with two colleagues Keith Moran and Shane Loughlin who had a strong hunch of where the market for manufacturing technology might be heading and a leap of faith decision. And today their business SL Controls is one of Sligo’s, if not Ireland’s, fastest growing companies with offices in Galway, Limerick, Maynooth as well as in Birmingham in the UK and Jacksonville Florida.

SL Controls, which integrates and validates software for manufacturing and well on its way to being a force in the move to Industry 4.0, employs around 90 people and revenues are surging north of €7m as the company plots its strategy for the next three years.

The business counts more than 40 clients and has amassed more than 1.5m hours of engineering time deploying industrial automation systems in some the most regulated manufacturing environments in Ireland and around the world.

I meet CEO and co-founder Keith Moran on a blustery morning at the Bank of Ireland branch in Sligo and he agrees that not all journeys are as easy as they seem; with lots of crucial lessons that were learnt along the way.

Moran originally studied accounting and computing at Sligo IT where SL Controls’ CTO Shane Loughlin was his lecturer in electronics. Loughlin was on a sabbatical from LotusWorks after he sustained an eye injury. “We struck up a friendship and one day I he let me know that he was starting a systems integration department at LotusWorks and asked me would I like to join. This was great because I was earning and learning.”

Two years into the role and over a beer one Friday night, Loughlin and Moran came up with an idea to go out on their own and start their own business. “We mapped out a plan and on the Monday morning we went into LotusWorks and informed management that we were going to leave.”

With the blessing of LotusWorks, SL Controls was formed. “Shane put in €40,000 and I agreed to put in the sweat equity and we would see where we would go from there. In the early days we got a lot of support from the team in the Sligo Local Enterprise Office and that gave us the runway and it is something I will never forget.

“Any business starting out today, the LEOs are there to support them. People should avail of these supports. It is every small piece that feeds into the start-up journey that makes all of the difference.

“Shane had the technical mind and I was to focus on the commercial side of things. We found an enterprise unit where we based ourselves between 2002 and 2007 and the early days were what I’d describe as a learning curve, with lots of hard hours and we were on the road a lot to different manufacturing sites.”

Early customer wins included LotusWorks as well as Hewlett-Packard in Singapore and with Wyeth, which is now Pfizer in Clondalkin, as it was ramping up production. “This allowed us to take on our first employees and that was when it really dawned on me the responsibility we had taken on. We were responsible for these people who also have families and commitments. So I had to make sure I was on the ball.”

A ticket to scale

Zoom forward 18 years and with numbers at the company heading in the direction of 100 and with offices in Ireland, the UK and the US, Moran said the plan for SL Controls is to achieve 50pc growth by the end of 2022 when he anticipates the company will have 125 employees.

“We’re hoping that by 2022 we will have 80pc of our work in Ireland and 20pc in the US. Our plan is to diversify and grow in the US and we want to maintain and grow the current level of workforce we have in Ireland.”

Scaling is a term that Moran doesn’t take lightly and if anything he has had to learn tough lessons already in growing SL to its present level.

“The key lesson is not to take on too many overheads. At one time in the past we thought we could get to a certain scale by taking on overheads but it didn’t exactly happen in the time frame we thought. That was a good lesson, you have to make sure that you don’t over-commit.

“Another key learning was to achieve the right commercial rigour; that you’re constantly looking for leakage, always identifying where things can be tightened up without the needs to slash and burn, of course. That to me was the key lesson on the journey to scaling, that trying to become too big too quickly could be dangerous. Thankfully we came out the other side and we have a lot of great people in management roles that are really supporting the growth of the business.

“Maintaining growth and ensuring your business is going in the right direction is a lesson every business owner needs to wrestle with. The key is to ensure you have the correct commercial rigour in place when making decisions, and be constantly monitoring progress.” 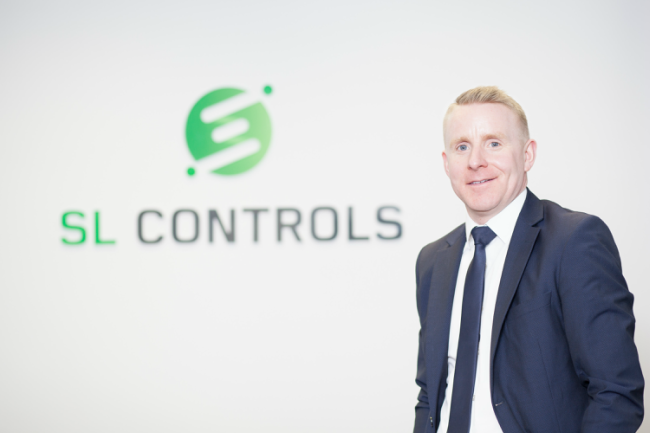 Another vital focus is innovation. “You always have to be innovating and looking at what the next thing will be in your sector; if you don’t you will be left behind. Similarly, for SL Controls it is about being in the spearhead towards Industry 4.0, the fourth industrial revolution. A key trend is the manufacturing world’s move to taking data off-premise into the cloud and we are focused on platforms like Microsoft Azure.

“This requires setting up a proper, robust service desk so that we can give our customers the right support and offering right from the beginning of a project through to the end and support them through the lifecycle of the machines in their plant. We are developing processes and techniques that will help our customers on their journey to Industry 4.0. We always have to be innovating and looking forward.”

Moran credits Enterprise Ireland for enabling the company to grow overseas. “It isn’t just the market access they provide but also the data they have on various markets as well as trade missions to places like Boston, Philadelphia and New York. Researching your market is critical and it is very important to build on the relationships that you are introduced to in those markets but also on the ground in Ireland. It is easier to make a sale if we’re doing good work for those customers in Ireland. We opened our first US office in Jacksonville, Florida, thanks to work we were doing with a customer from Jacksonville based in Ireland.”

In terms of core lessons for Irish companies moving to the US, Moran’s advice is to start small. “You can waste a lot of money trying to crack America. The key is to do your research. I went around and met a lot of Irish companies that have scaled into the US and we learned a lot from their experiences and we took on a lot of good advice. The first bit of advice is don’t start too big. Rent a Regis office at first and build out when the time is right. And then you can invest further. Learn from other businesses that have done it, leverage the great support from Enterprise Ireland, but do your research.”

Tara Rodgers, head of Bank of Ireland for Sligo, Roscommon and Leitrim paid tribute to SL Controls’ growth journey. “We at Bank of Ireland have been working closely with SL Controls since origination in August 2002 and I am very proud of what they have achieved to become leaders in their field of industrial automation.

“For me it is exciting to watch a company grow and be one of the larger employers here in Sligo town. They have an extraordinary vison and ambition, but yet very much aware of their roots in Sligo and are hugely supportive to the business and economic development of Sligo,” Rodgers said.

The journey from start-up as a college graduate today leading a scaling business has had its challenges but has been educational too.

“I suppose, what I learnt most about myself over the years was the capability I have in terms of decision-making. Another lesson is to surround yourself with good people and very early on we made people in key positions shareholders. We brought Darragh McMorrow on as VP of Commercial, Paul Clarke as Technical director, Dermot McMorrow as Compliance director and Mick McHale as VP of Operations

“They’ve helped us scale the business as we move forward. But we did that at a very early stage in 2003/2004. All those guys have been with us since then. So, I suppose the lesson is, that even though you feel like you may be giving away equity, people can drive the business on for you. And I think that’s something that people shouldn’t be afraid to do is, you know, look, identify key people and reward them for their efforts, because they will be as hungry to drive on the business as well. So that has been a very, very good lesson.”

Another lesson is to bring in outside directors to drive the business forward.

Rules to live by while working remotely

Revenue moves to help SMEs with cashflow amid Covid-19