Ireland’s oft-overlooked indigenous tech sector has the grit and the goods to generate thousands of jobs across every corner of Ireland in the post-pandemic future. And when times are tough, that’s when real innovators show their mettle.

That was the clear message to Tánaiste and Minister for Enterprise, Trade and Employment, Leo Varadkar, TD, this morning (19 February) at Scale Ireland’s webinar on the role of indigenous tech start-up and scale-up companies in the recovery. And Varadkar very clearly accepted the message, encouraging the sector to make its feelings clear ahead of the next Budget.

“Your businesses are the backbone of our economy,” Varadkar said. “You have a crucial role to play in Ireland’s recovery by driving exports, investments, regional development and employment. And I am confident that we will bounce back and come out the other side of this pandemic stronger and better than we’ve ever been before.”

But while Varadkar highlighted the work of the SME Task Force and its long-term vision for entrepreneurs and SMEs, the €30m in the recent Budget allocated to venture capital, the latest seed and venture capital scheme so far leveraged to more than €340m and the work of Enterprise Ireland as the largest seed investor in Europe, it was clear that what Ireland’s indigenous tech sector wants is cohesion.

A level playing field for attracting talent is crucial 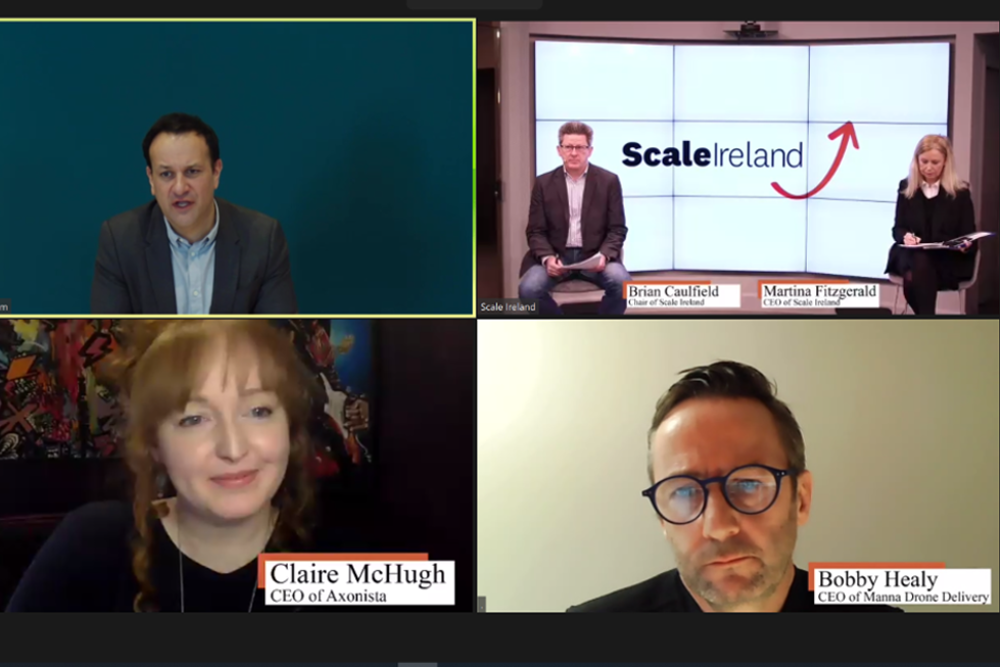 “Many of the jobs lost in the pandemic will never return. Yet Irish technology start-ups and scale-ups offer great jobs and are crying out for scale”

At the Scale Ireland event, the organisation’s chair Brian Caulfield, a successful entrepreneur and venture capitalist, acknowledged that part of the indigenous tech sector’s problem up until now was that it had no real effective lobbying voice, despite its momentum and positivity. This is despite other sectors such as agriculture and construction being old hands by this stage.

Drawing on Scale Ireland CEO Martin Fitzgerald’s point about Ireland being a hotbed of indigenous activity in areas from medtech to cleantech, e-commerce and enterprise software, Caulfield highlighted the role indigenous tech companies are playing when it comes to supporting balanced regional development.

“There are 190 of these companies in Cork, 150 in Galway, 90 in Limerick and more in smaller towns like Tramore, Gorey and Killorglan which are also generating start-ups who are ambitious to growing employment and innovation in their home towns. And each job in one of these companies typically supports up to five other jobs.”

Caulfield also pointed out that by their very nature these companies are exporting from day one. “Not only that, but they’re exporting high value environmentally friendly digital good and medical devices.”

Caulfield also pointed out: “Many of the jobs lost in the pandemic will never return. Yet Irish technology start-ups and scale-ups offer great jobs and are crying out for scale. There’s a huge opportunity to connect those dots with appropriate training and educational programmes. So there’s lots of potential.”

But what’s holding them back? Unresolved problems around funding, share options, capital gain tax and competing with multinationals for talent.

Reach for the skies

At the event Bobby Healy, CEO of Manna.Aero explained to the audience of viewers from Dublin to San Francisco how Ireland has the opportunity within its grasp to be the number one country in the world for drone delivery of goods from fast food to essential drugs. His company has raised funding from backers including Stripe, Greenman, Dynamo Ventures, Elkstone and Frontline Ventures and employs 40 people.

“We plan within two years to scale-up manufacturing of our aircraft. So that means producing tens of thousands of aircraft and we have plans to expand in Ireland to another two or three towns to feed between 50,000 and 100,000 people over the next 12 months. And similarly, we have plans in the next quarter to be in the United States and serve a town of around 20,000 people. So from our point of view the USA market is the biggest opportunity and the most cohesive one for us. But we want to do it all from here and we think we can build a platform here, the technology, the aircraft manufacturing, all right here in Ireland and we can export that and make that operational in any country in the world.

“So for us, we want to be starting to generate significant revenues within two years time and become profitable in two or three years times. In five years’ time we expect to be the leader in the world doing what we do. And that means being very scaled in the US and across Europe.”

Also speaking was Claire McHugh, co-founder of Axonista, a TV technology company that is focused on capturing a sizeable chunk of the live stream shopping market which she says is worth $130bn a year in China alone.

“That market has doubled in size in the past year and we see this trend spreading west. We’re the tech platform that enables live stream shopping and we have been delivering this for global shopping channels like QVC and HSN since 2015. So we are well-positioned to build a market-leading video commerce company from Ireland. And we were export-focused from day one, and particularly in the US markets. We expanded in the last recession in 2010 and now we see the market coming to us and we’re on track to double our revenue this year.”

McHugh said that because of the pandemic the company’s fortunes have actually accelerated and the company is in recruitment mode. “We currently have 10 open roles on our website. They are roles in design, engineering, project management and operations. And we’ve been an early adopter of remote working and all of these reole sar working from home anywhere in Ireland. Our newest member of the team is joining us from Co Clare next week.”

If Healy and McHugh are emblematic of the calibre of leadership and speak of the myriad opportunities, they also made it clear they bear the brunt of the kind of problems facing indigenous tech companies.

“We’re beating the best of the companies trying to do this in the United States and because we have the support of the IAA (Irish Aviation Authority) to move forward we have a big advantage,” said Healy.

“So we are bullish when it comes to scaling the business. That’s when we run into difficulty. When I ran Cartrawler and we were at 600 people we found there wasn’t a level playing field when between ourselves and FDI companies. The advantages that the FDI companies enjoyed were better than indigenous tech companies.”

The war for talent still rages

Healy explained that the biggest challenge for indigenous companies is finding and retaining talent and pointed out that there just isn’t a level playing field between what SMEs can offer versus FDI multinationals.

“When I was running Cartrawler I constantly lost people to FDI companies that just had deeper pockets and better ways to incentivise people than indigenous companies do. The tool that we use is obviously salary, and that’s a blunt instrument. It would be better to have stock options and a stake in the game for employees. There’s 40 excited young engineers in my business now and they’re as excited about the mission is to build the biggest company in the world as they are about stock options and when we see that Ireland has the poorest stock option regime than literally every other entrepreneurial country in the world that is disappointing.

“I would love to be hiring people from Israel or the UK and say ‘if you come here here’s how your options will pan out over the coming five years’. These are high risk things, they only work out if the company works out. We’ve come a long way but we’re still at a disadvantage.”

McHugh said that the bureaucratic maze of available supports for indigenous as well as employment visas for overseas talent is impacting firms.

“It also makes it very limiting as an Irish company to be an employer in other jurisdictions as well.”

She echoed Healy’s point about competing with FDI firms for talent. “I’m based in Grand Canal Dock, surrounded by LinkedIn, Airbnb, Google, and I just can’t compete with the size and the incentives that they give.

When it comes to supports for firms, simplification is needed. “R&D tax credits are a fantastic thing, but a lot of people just really don’t know how to access them or how to use them.”

Brian Caulfield took up the point: “A lot of money is spent on R&D tax credits; approximately €500m a year. But something like €450m of that is going to large companies, and in many cases large FDI companies, rather than smaller, early-stage Irish tech companies.”

On the subject of share options, Caulfield recommended an EU-wide approach to solving the problem for indigenous European companies. “If an Irish company can issue [share] options to people in any European country based on a single scheme, that would be tremendously powerful. And it would be great to have the support of the Irish Government in supporting that particular agenda.”

Unlike other sectors of the Irish economy such as agriculture or construction, the indigenous tech sector has never had a voice. At least not until now.

Thanks to the pioneering efforts of Liz McCarthy and Brian Caulfield to create Scale Ireland, today under the able stewardship of Martina Fitzgerald, a new chapter is about to be written about the Irish tech scene.

That chapter will be all the more potent if the potential of rising stars like Manna Aero and Axonista is unhindered and if the well-articulated messages of Healy and McHugh are heeded.

Post-pandemic leadership will be about empathy and insight

Irish SMEs miss out on digital surge in jobs and revenues