Pinergy CEO Enda Gunnell tells John Kennedy how electricity is the fuel of the future and how smart metering technology will be a game-changer for the Irish economy.

For Enda Gunnell, years spent advising SME owner-managers on running their businesses left him with a burning desire to start his own business.

A chartered accountant by training, he worked with professional services firm Mazars for 23 years after leaving college. “I really enjoyed spending a lot of time on the business advisory side, working with owner-managed businesses that typically had around 50 employees. But often these owner-managers had no one to talk to and so I became a kind of trusted advisor and confidant, working with them to help them grow their business. A lot of it was strategy and finance but there was something inside of me that said: ‘I’d love to try this myself.’

“A lot of the advice was around finding efficient ways of doing things and taking out costs, but also it was very serious issues around the survival of the business. But I was aware I was on the other side of the table and I knew I was removed from the day-to-day stuff. And at times it was very intense, high-adrenaline and it could be quite stressful, but I was always able to step back from it. And then one day I just decided, let’s try something different.”

That something different is Pinergy, a fast-moving energy player that helps homes and businesses across Ireland become more energy efficient through smart energy-saving solutions. The fully-regulated and licensed electricity provider delivers 100pc certified green energy and enables homes and business to reduce energy consumption through a range of technology solutions to help both the planet and their pockets.

Among the recent innovations at Pinergy has been an alliance with smart metering player Ohme to help electric vehicle (EV) drivers access the best tariffs and charge their vehicles when the grid is at its greenest. Pinergy has also joined forces with light-as-a-service player eLight to serve the student accommodation sector in Ireland with 100pc green energy.

For Gunnell, the spark to start Pinergy came while he had just turned 40 and Ireland was in the depths of the last recession. A client asked him to investigate potential investment opportunities in the US. This led to him studying the pay-as-you-go electricity segment which was growing rapidly in the States and emerging technologies that offered electricity providers the chance to generate recurring revenues but also created empowering options for businesses and home owners.

With renewable energy gradually coming onto the grid, he felt the time was right to bring an alternative offering to the Irish market. “I was in a strong position, senior in a very good firm and suddenly in my mind I wanted to start a business in green energy. I knew from my accounting work that 80pc of businesses that start, fail. A little knowledge can be a bad thing sometimes. I was aware of all the risks and decided the time was now or never to give it a lash.”

Gunnell had definitely moved to the other side of the table. “Suddenly I had this blank sheet of paper in front of me. Now it was me trying to prove to myself, can I do it? And that’s the journey I started. And that’s what drives you to actually do something like this and see if you can make it work.”

In 2013 Gunnell got to work and was aware from the get-go that he was endeavouring to bring a smart revolution into an industry that had barely modernised in 100 years.

The drive towards green energy 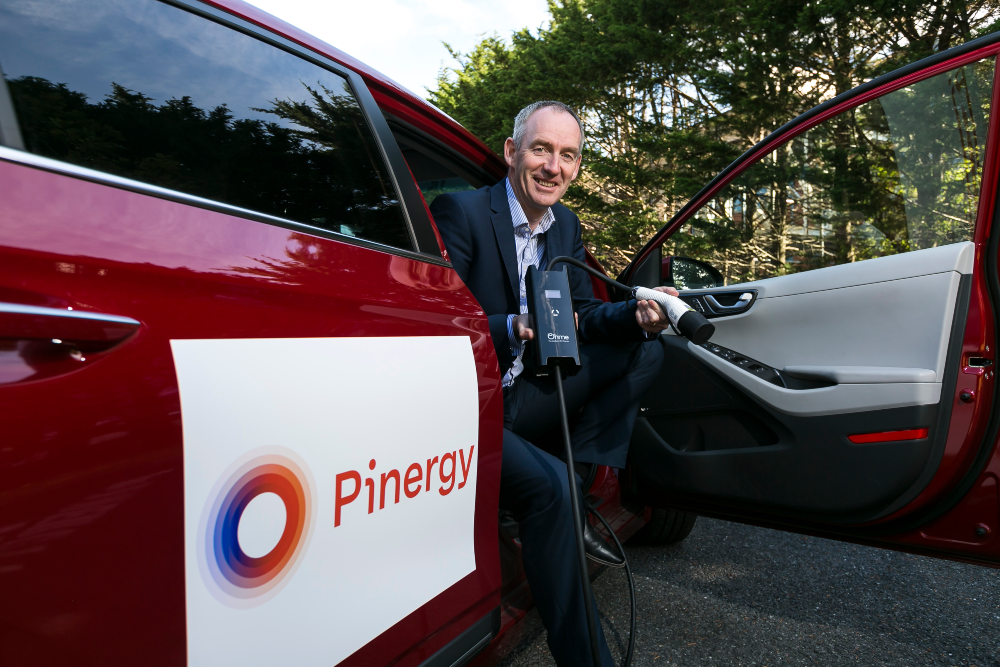 “Electricity is the fuel of the future. It can be a clean fuel if you consider 30pc of electricity in Ireland is currently from renewables and the plan is to get to 70pc by 2050”

While the electricity market in Ireland was deregulated in the late 1990s, major changes were occurring in terms of the grid and the onset of renewable energy. Ireland had gone from being a country with a single incumbent operator to now having more than a dozen electricity suppliers and energy sources that were no longer coming from peat bogs but from wind and sun.

But despite the increased competition and the drive towards green energy and the development of a North-South interconnector, the window to innovate and differentiate as an operator in this space he found to be quite narrow.

“It’s a very structured market and once you get your license you are a regulated entity with systems and protocols you need to comply with. And you have to demonstrate to the regulator that you’re able to operate on that basis, because no other basis is acceptable.”

But at the same time the smart future of energy could change everything, powering everything from electric vehicles to homes that can generate their own electricity and sell it back to the grid. The devil’s not only in the detail, it is in the digital.

“Electricity first started in Ireland in the 1920s and by and large the power we used then is the same kind of power we use today. The electricity business hadn’t changed much in a century in terms of how it was structured and operated until new players like Pinergy came into the market. The market is very competitive, and it is a price-competition-dominated industry. Not only that but only 15pc of Irish people switch energy provider every year.”

Another challenge, says Gunnell, is the way billing is structured in the market. Most new customers are offered a discount for the first year before the rates go back up and most bills are estimated rather than being pinpoint accurate. “It’s a bit like going to the supermarket and filling your trolley with goods that have no prices on them, you go home and a few weeks later you get your bill based on the supermarket’s best estimate of what you owe, not actually what you owe.

“With Pinergy we wanted to change all of that. We were the first electricity company to bring smart metering to Ireland and to try and give people the ability to understand their electricity consumption and possibly control that.

“Electricity is the fuel of the future. It can be a clean fuel if you consider 30pc of electricity in Ireland is currently from renewables and the plan is to get to 70pc by 2050. Much of that will be sourced from wind but increasingly you will also see solar energy be used and solar farms will start appearing on the landscape as well as rooftop solar being used in domestic homes and commercial premises.

“We’re very ambitious about this and we’re selling 100pc renewable power and we want to also empower our customers with knowledge and insight around how they’re consuming energy and teach them how to optimise their energy consumption, eliminate waste and hopefully inspire some sort of meaningful change because we believe electricity is a resource, not a commodity.”

But not only will consumers be able to discern what they’re using to charge their homes, phones and cars, very soon Gunnell believes, they will be able to sell excess energy back to the grid. “That is coming in less than 12 months. Some regulatory changes will be needed to make that happen but peer-to-peer trading between neighbours and businesses could become commonplace.

“And therefore, the next few years are going to be very interesting in terms of electricity, an industry that has barely changed in 100 years is going to become unrecognisable. Because electricity will power the future.”

A bolt out of the green 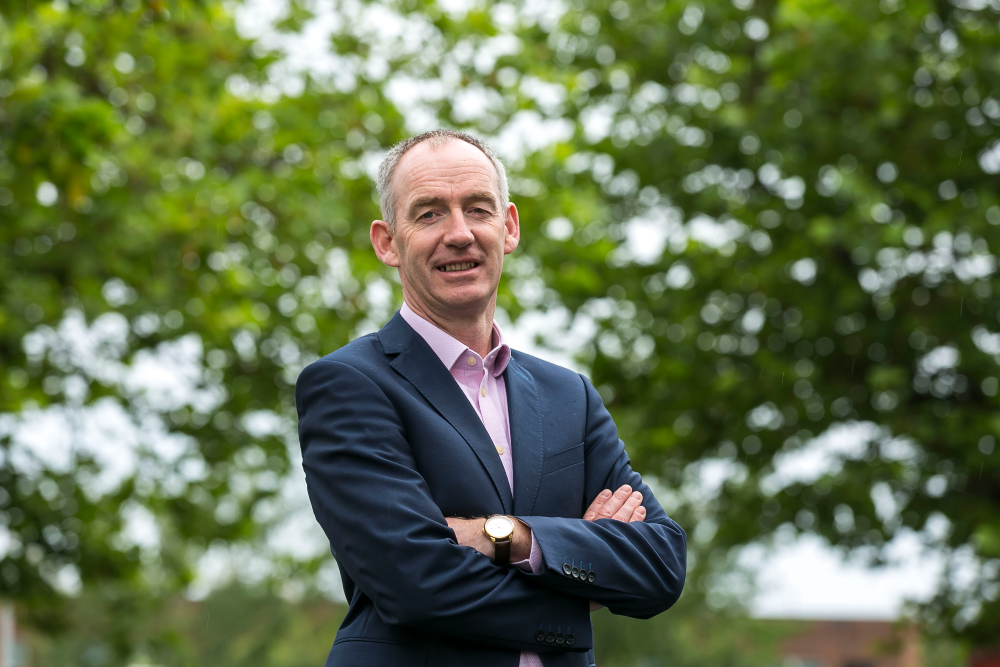 “The days of bills based on estimates are going. And so, if the market is changing, what we’ve got to be is at the forefront of customer-led solutions as opposed to industry-led solutions”

Gunnell says Pinergy’s business is split 50/50 between business and residential and the company relies on its smart metering technologies to give customers the information they need to reduce and control their energy costs and carbon emissions.

“Smart information is power. This information allows them to ask the questions to change their behaviours and start bringing own consumption. We also allow them to roll-out energy-efficient technologies as an investment case. Our role as an energy supplier – both to residential and commercial – is to help those customers on a sustainability journey. And we believe everybody has a role to play in creating a smart energy future.”

He points out that from a business sectors point of view there is no “one-size-fits-all” solution, as hotels, for example, would have as distinctive energy needs as food businesses, manufacturing plants or dairy farms.

Recognising these difference, Pinergy has focused on tailoring its offering to specific segments. “We’ve taken on more than 300 dairy farms in the last 12 months and a lot of that is down to farmers wanting to understand their usage and figure out what is possible. For example, with a time-of-use tariff we’ve been able to extend the night-time rate available to a farmer by an hour which allows them to get the milking done in the morning at night-time energy costs.”

Another sector is the property management and student accommodation sector. In the case of the latter, Pinergy has been able to reduce squabbles over bills by putting smart meters into individual rooms and students are able to buy electricity on their smartphones or in retail outlets.

This forward-thinking approach to energy costs has extended to Pinergy’s financial relationship with its banker Bank of Ireland.

“Because the commercial market pays in arrears this creates a working capital requirement and there is a lag between when they turn the lights on and when we get to bill them. The bank spent the time and got to understand our business model and by combining this insight with the information generated through smart metering we were able to use invoice discounting by giving the bank a realistic estimate. By working together, we were able to create our own receivables finance solution to provide working capital as the business was growing.”

Michael Lauhoff, director of Business Banking, Bank of Ireland commented: “We are delighted to support Pinergy for their next phase of commercial growth. Innovative firms such as Pinergy have a clear ambition to support both businesses and consumers with sustainable energy consumption, which is critical in building a sustainable future for Ireland. At Bank of Ireland, we want to play our part in Irelands response to this issue and we look forward to supporting Pinergy over the coming years as they look to expand.”

Looking to the future, Gunnell believes Pinergy has a vital role to play in helping businesses demonstrate how sustainable they are in terms of waste reduction, reduced carbon emissions and reduced energy consumption. At the heart of this is digital information and insight.

Another huge opportunity is applying the same knowledge and understanding to the domestic environment, empowering homeowners to enjoy the same smart metering capabilities as the farmer or manufacturer who was able to get an extra hour of night-time electricity.

“The days of bills based on estimates are going,” Gunnell said. “And so, if the market is changing, what we’ve got to be is at the forefront of customer-led solutions as opposed to industry-led solutions.”

StreatSchool gets your treats to the streets