Clonakilty may seem to some to be the unlikely location for a potential fintech unicorn to emerge from, but then again why not? John Kennedy talks to Global Shares CEO Tim Houston who is plotting an IPO for the Cork company.

When everyone is battening down the hatches or ducking for cover, look for the people running back into the fight. That was the instinct I felt while chatting with Tim Houston, CEO of Global Shares, the Clonakilty fintech business that in recent weeks announced 150 new jobs with hundreds more to follow.

An employee-owned company, Global Shares is seeking to increase its headcount from 370 currently to 1,000 by 2024 and in that timeframe hopes to IPO and surpass a valuation of $1bn, bringing it into the ranks of players like Stripe.

“Our headquarters is Clonakilty. We have no plans to move to Silicon Valley. We want to become another unicorn and we are on track to get there within four years”

Global Shares is one of a handful of companies globally that offers fully outsourced employee share plan management. It provides the administration services through its team of expert share plan analysts, financial, legal and compliance professionals, but also provides a software platform where employees can view, manage and sell the shares they own, online or through an app.

Global Shares’ success is also down to a global network of banking and brokerage partners.  A combination of the company’s software and partner banking and custody supports makes it the ideal solution for many global companies. Its clients include Italian insurance firm Generali, Krispy Kreme, Cargill, Fujitsu and many more global, household names.

CEO Tim Houston had actually retired from business and settled in rural west Cork with his Donegal wife who wanted to return to Ireland with their four children. The Englishman had no interest in going back into business but around 2012 he agreed to help out a friend by doing a day or two a week with the company.

“It became clear to me that if we were going to make a fist of this company we had to change it from being a service company to being a software product company and a broker. So very quickly it was clear that our competitors would be Morgan Stanley, Merrill and UBS, to name a few.

“But at the time our software was poor, and we were serving customers on different continents and competing with companies with bigger budgets. So, we took a big bet and decided that if we’re going to compete successfully we would have to write our own software, but also the best software and also try to become a better broker than the likes of Morgan Stanley.

“The original founders of the company said that was impossible. And they were kind of right, it was a little more difficult than we thought, not for the faint-hearted. A real David and Goliath struggle to be honest. David had his slingshot; we had a great tech vision and so we set about building this technology and by October 2015 we had become regulated.”

A key advantage early on was the fact that Global Shares had a significant number of global clients. Another advantage was many of its competitors were regionally focused, rather than globally focused.

From Clonakilty to the world 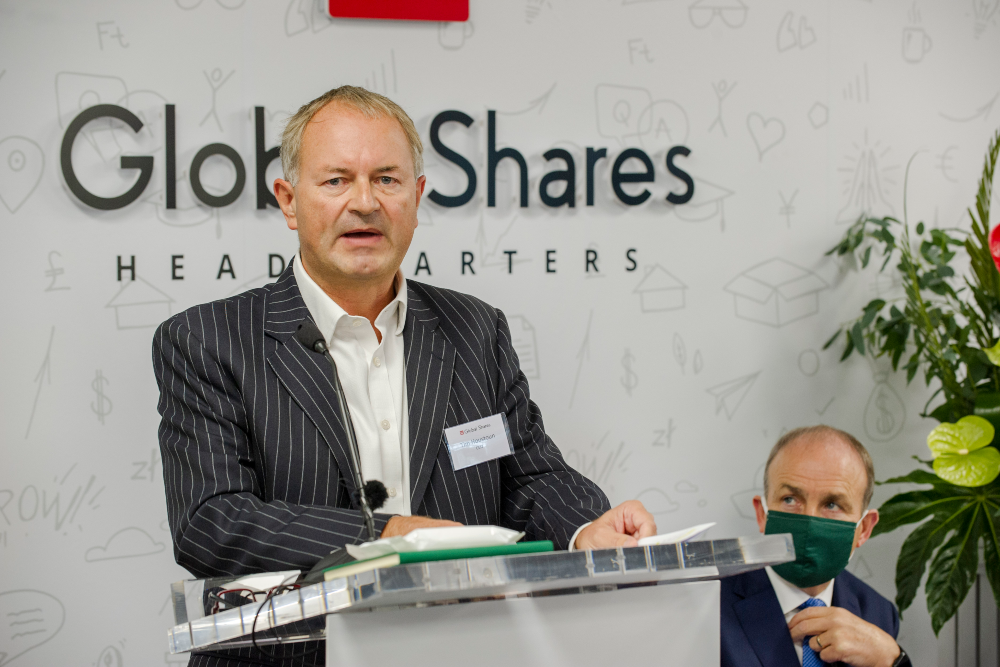 “We aim to IPO because we think that is the best outcome for the employees and we’re all shareholders. We practice what we preach”

Within months of launching their platform they landed a big win in the form of Generali, the largest insurance company in Italy and the third largest in the world.

“We won them with our software but we had only just become a broker so we had to persuade them we could be the broker as well.”

Global Shares successfully won the tender against established global banking giants and has since been growing successfully around the world. For example in Japan the company has landed major corporations such as Toshiba, Fujitsu, NTT, Mercari, Tokyo Electron and others. “So, we’re doing reasonably well,” Houston smiles.

“Our assets under management are about $7bn. This creates a big value for Global Shares and makes it a very attractive company. Our private company assets are something like $50bn. So, we’re talking huge numbers for a small company.”

To explain the context of this, global banking giant Morgan Stanley last year acquired Canadian company Solium for an estimated $900m, a sliver of the $8.7bn Morgan Stanley earned in 2018, but a bold move calculated to give it an edge in the competition for wealth management clients.

“Global Shares is probably the only independent company left in this space and one of only three global providers. The three global providers are ourselves, Computershare and Morgan Stanley by virtue of its acquisition of Solium. So whenever there is a big global deal to be won, it is likely one of us three will win it.”

Houston said that after a competitive tender the company recently landed a global deal with a Saudi Arabian public company, one of the largest in the world, as well as a leading player in the US market. “So, our growth is now speeding up. A few years ago, we had 20 staff. We have 360 now and we’ve taken on another 70 during lockdown. We expect to go from 360 to 1,000 people in the next four years.

“In terms of IT and R&D jobs we had 40 people in 2018 and we’ll bring that up to 200 this year. Half of our staff are in IT and R&D and that’s to try and keep up with the demand that we’re seeing from our clients.

“We’ve got very good software. We have an amazing team. Our headquarters is Clonakilty. We have no plans to move to Silicon Valley. We want to become another unicorn and we are on track to get there within four years.

“We aim to IPO because we think that is the best outcome for the employees and we’re all shareholders. We practice what we preach. We’ve had an interesting few years and we are growing at a compound rate of 40pc a year over the last four years.”

In terms of revenues Houston said that in 2019 Global Shares turned over $20m last year. “This year we were projecting $30m but in reality, it will be around $25m because of Covid-19.

An accountant by profession, Houston worked in the financial services industry rising to CFO before settling down to retirement 12 years ago.

Joining Global Shares with the intention of working part-time, it quickly became a full-time position. “It wasn’t planned but it has been very enjoyable and I love seeing people coming along. We had 20 people when I started and many of those who were just college graduates are holding senior roles like chief operating officer. It has been amazing to see them become the most experienced people in this business. 98pc of what we sell is outside of Ireland, so that is all export income.”

In many ways Global Shares, operating out of Clonakilty in rural west Cork, is one of Ireland’s best-kept tech secrets and certainly one of Europe’s best-kept fintech secrets.

“One of the ideas of turning it into a fintech company was that if your backbone was software then you should be able to scale that internationally. The only change we made was that in 2019 we were so successful at winning business you couldn’t manage that solely from Ireland anymore so we have 16 offices worldwide in places like Tokyo, Nashville, Barcelona, Beijing, Lisbon, a good-sized operation in Cork city and more.”

Returning to the initial pivot from a trudging services business to a global software player and broker in the wealth management business, Houston agreed it was a gamble. “On the face of it at the time we were destined to failure and we bet on black, so to speak. And we succeeded in part because of where we are located, but we were determined to succeed. Of course, it has been a rollercoaster with a lot of highs and lows, but you battle through those when you are in business.

“Running this company gets easier as the depth of the team increases. Has it been easy? Not particularly, and I wouldn’t underestimate the technology challenge. This software is very complicated with different tax systems in every country. We knew that our competitors were floundering with these challenges and so what we did was a huge undertaking and many people thought we would fail. We clearly didn’t.”

In terms of the IPO plans, Houston said that the company intends to go public on either the New York or Tokyo stock exchange in the next two-to-three years.