A Zoom-directed short film called Devolved shot in isolation in Monaghan is claiming to be a world-first.

While workers across the world have all become accustomed to Zoom meetings during the Covid-19 pandemic, film-makers Adam Brennan and Colin Fleming directed Devolved, an entire short film that was shot in Monaghan via the video conferencing platform.

Shot over seven days in isolation in Monaghan, with Colin dialling in from Dublin via Zoom to direct, the film has a production story almost as surreal as the script.

“It was certainly a whole new experience in trying to juggle and call shots between Zoom and WhatsApp, but that’s what I love about the chaos that is film-making – problems get presented, and you just have to solve them”

It owes its existence to the limited amount of film-making equipment Adam had to hand, a leap of faith in working together between a writer and director who have still never actually met, and the infinite patience of Adam’s family, who had to put up with their lockdown refuge being turned into a film set for days on end. 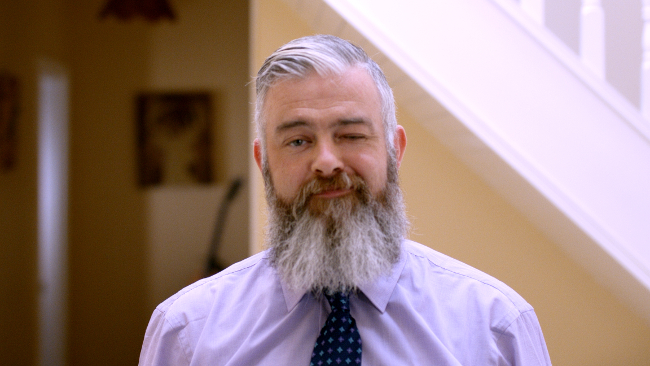 A still from the short film Devolved

Devolved introduces us to Adam, a fastidious and work-proud customer care representative for a healthcare company. Adam is a man who defines himself by his work, and the difference he makes in his customers’ lives, to the point where his entire routine revolves around how best to help them when they need. So what happens when a pandemic rolls around and strips him of his sole raison d’etre?

“I knew I wanted to make a film in 2020, but Covid-19 threw a spanner in the works,” explained writer and producer Adam Brennan.

“I’ve always tried to do my best with what’s to hand, so I just asked around to see if anyone else wanted to get involved, and thankfully Colin answered the call. The virus had the power to prevent us leaving our homes, but not to prevent us creating something we’re both very proud of.”

Director and producer Colin Fleming added: “Honestly, when I first told friends I was considering this project, with someone I’d never met and whose work I wasn’t that familiar with, they all thought I had lost it. Some even reckoned it could spell trouble for my career. But, to be fair, I couldn’t be happier with how it’s all come together, and quite a few of them have even withdrawn those comments since they’ve seen the film.

“It was certainly a whole new experience in trying to juggle and call shots between Zoom and WhatsApp, but that’s what I love about the chaos that is film-making – problems get presented, and you just have to solve them.”

ApisProtect deal with Microsoft as sweet as honey