Essentially one of Ireland’s first real social enterprises, the almost 50-year-old Connemara West plc has plans to excel as a global learning and digital hub.

As the pandemic inadvertently highlights the advantages of Irish regions for living and working, Connemara West has an edge as a safe and healthy place to locate, as a business, as a student or as a family.

It might sound strange at first when you consider that one of Ireland’s original and longest-standing social enterprises started out as, and still is, a publicly-listed company. Charged with the rural development of west Connemara, the Connemara West plc started out in 1971 as an effort by local people to boost their local economy by promoting self-catering tourism at Tullycross and Renvyle thatched cottages.

“It was for the social good. This was a social enterprise and the people who founded the  company were social entrepreneurs long before that term was popular”

Connamara West plc chair Kevin Heanue explains: “It was formed a sort of fundraising drive to boost the local economy and it’s owned by shareholder families.”

Almost 50 years later it employs 24 people and is a driving force for community and economic life in the region. For example it counts Teach Ceoil in Tully, Conservation Letterfrack, GMIT Letterfrack, and Connemara Community Radio as some of the local projects and partnerships in which it is involved. It also provides services to the local community through the Connemara West Centre, which is located in the former St Joseph’s Industrial School in Letterfrack. Community services provided by Connemara West include the Tigh na nÓg crèche, sports facilities in Letterfrack and administrative services through the community office.

Heanue explains that the origins of Connemara West began in an effort to create local employment and crucially to preserve the social and economic fabric life of the region which was blighted by emigration. 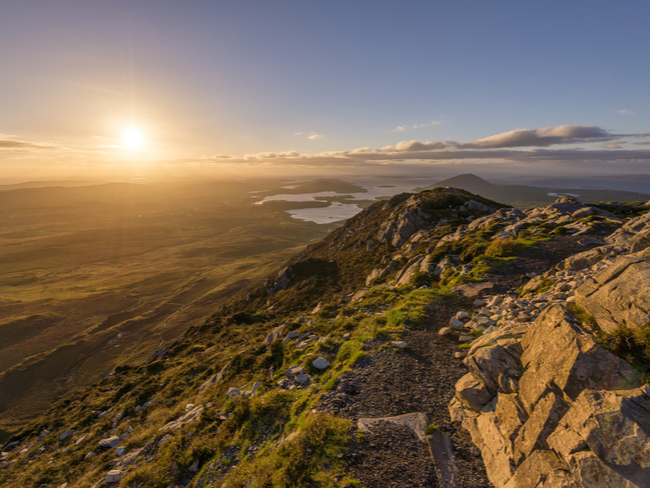 View of the North Atlantic from Diamond Hill in Connemara.

“The agreement was made at the very start that shareholders would never receive a dividend. The dividend instead was the social, economic and cultural improvement of their community”

And now, in 2020, as a pandemic rages and threatens the social and economic fabric of the entire planet, Heanue believes the isolation Connemara West region offers as well as the culture that has been preserved could serve as an economic bulwark that will serve it well into the future.

In many ways, as social distancing becomes the new norm, Connemara West intends to play to its strengths in providing safe, low carbon experiences.

“The writing’s been on the wall in terms of climate actions and we are trying to play our part in positioning our community in terms of the low carbon future. We’re building on the kind of experience we have offered for more than 40 years as a learning destination for scholars from US universities but broaden that out to include wellness and meditation and also a safe destination for corporate events and retreats. We’ve always focused on the ‘micro’, including a micro conference for the last five years that has never gone above 50 bucks to attend.

“Connemara West is already established as a kind of academic retreat destination for both Irish and international academics. Combined with the Connemara National Park it could also serve academics well in terms of sustainability and nature education.”

Heanue explained that at least six US colleges work with the company on study abroad programmes. And because of the splendid isolation the region offers, he believes this can continue safely.

“And 49 years later the students are still coming.”

Testament to a resilient people

In every county along the western seaboard of Ireland, people often pay tribute to the resilience of their forebears crafting a life on the westernmost edges of Europe.

Almost 50 years ago, the people of Letterfrack and the surrounding district were well used to economic hardship but chose to do something about it.

Heanue explained that Connemara West was incorporated to focus on the construction of nine cottages at Tullycross to make the region a tourist destination and create jobs. “There was a fundraising drive and they got some public money and some philanthropic donations, but these cottages were built by local people on time and in budget. It gave the community confidence in being able to take on projects like this and deliver on time, because they were told at the time it would be impossible.

“Viewing the cottages as an engine to generate finance that could be reinvested in other community projects they sparked on the idea of local families having a shareholding in the company. The agreement was made at the very start that shareholders would never receive a dividend. The dividend instead was the social, economic and cultural improvement of their community. It was for the social good. This was a social enterprise and the people who founded the  company were social entrepreneurs long before that term was popular.”

Heanue explained that in the 1980s the economic imperative was to create employment in a region where people were leaving school too young and where emigration was soaring. This gave rise to the Connemara West Centre to help develop skills for young people.

“GMIT partnered with Connemara West and established a campus here in Letterfrack where they now have 230 students every year doing degree courses in furniture manufacturing, design, teacher training and it’s now our National Centre of Excellence for Furniture Technology and Design and it has been for more than 33 years.”

The idea to invite US university students to study in Connemara West began in 1973 through a relationship with Thomas Aquinas College in Michigan and the company now works with at least 11 US college partners on study-abroad programmes.

“Our overall goal is to make Connemara West a global learning and digital hub as well as a destination for corporate retreats and events as well as being a wellness destination.”

No time for pandemic panic

As Heanue explains it, traditionally the population of the region around Letterfrack can go from 10,000 people to more than 30,000 during the busy summer months.

But even despite the staycation trend of the summer of 2020 that saw holidaymakers from the east flock to the western seaboard, businesses like everywhere else have been challenged and will continue to be challenged.

Heanue believes that by focusing on the strategy to make Connemara West a global learning destination and a digital hub for remote workers there are opportunities for the region.

“This is a healthy place in the broadest sense of the word. It has been a destination for a better quality of life for decades and so there is potential in making it a destination for remote workers. We can offer family accommodation on short leases, we have childcare facilities that can be bundled into that. So the real opportunity is positioning Connemara West as a safe and healthy place to live and work.

“I think rural regions are well-placed to take advantage of opportunities led by changes caused by the pandemic. Ultimately for Connemara West we have a well-developed economic, social and cultural infrastructure that can accommodate those changes,” Heanue concluded.

“It’s a bit of an old success story after almost 50 years but we have learned how to build the momentum to create a rich social and cultural infrastructure. And we just want to keep building.”

FiltraCycle stubs out cigarette litter to help the planet