After returning from the UK Ralph Benson co-founded financial and fintech firm Moneycube with Feargal McKenna who had also returned to Ireland from Australia.

Moneycube enables people in Ireland to take control of their investments and pensions through better use of technology, open pricing, and straight talking about money.

Co-founder and head of Financial Advice Ralph Benson left Ireland in the good times. It was 2006 and he left his Dublin home for a change of lifestyle – and career.

“I was working with global brands across four continents. I wanted to bring some of that knowledge home to Ireland”

Ralph had studied English & Philosophy at Trinity College Dublin but went to Edinburgh — one of the world centres of fund management — to train as a chartered accountant with Ernst & Young.

Working in finance overseas, he began to realise that people in Ireland were missing out on new ways to build their savings so returned home to establish Moneycube.ie.

“I spent the guts of a decade working in the financial world in Edinburgh and London and gained massive experience. I was working with global brands across four continents. I wanted to bring some of that knowledge home to Ireland – especially the use of technology and the straight-talking that I had witnessed in Australia and other countries,” says Ralph.

In 2016, he set up Moneycube.ie in Dublin with Feargal McKenna, an acquaintance who had just returned from Australia, where he had been working in banking.

Moneycube.ie is an online platform for investments, savings and pensions and the duo set it up to make investments and pensions easy, transparent and profitable for individuals and businesses in Ireland.

Moneycube.ie is regulated by the Central Bank of Ireland, and a member of Brokers Ireland, the Institute of Chartered Accountants of Scotland and of the Investor Compensation Scheme. 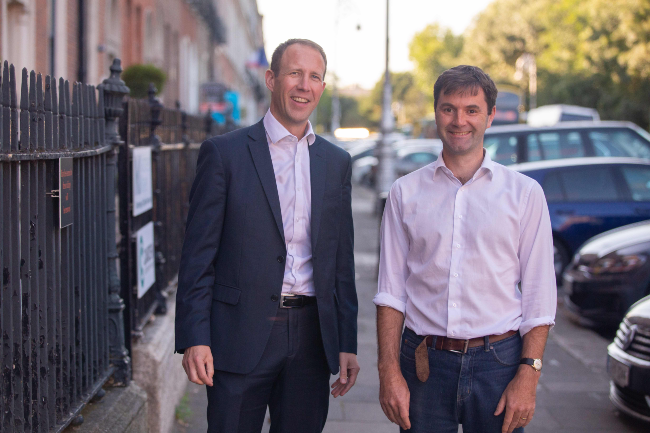 Ralph joined Back for Business at the start of 2020 on a recommendation from Feargal, who had been on the programme previously for another business venture.

“We were lucky in that we had very little business interruptions for us. We used the year to test the systems we had in place and see if they were robust”

“It was quite motivating to meet people like my Lead Entrepreneur Brian Crowley who are such successful businesspeople and inspire you to aim for your goals. It was also great to be connected with people who were at the same stage as you in your business,” he says.

Covid-19 did not hit Moneycube.ie as hard as other businesses, in terms of business continuity as they were already online. In fact, the company doubled its workforce by hiring two new staff members during the pandemic.

Moneycube.ie’s successful Pensions Awareness Week (PAW), which was launched in 2019 and included the team travelling the country in a 1960s VW camper van, had to go virtual in 2020. But the week-long event was a huge success.

“We were lucky in that we had very little business interruptions for us. We used the year to test the systems we had in place and see if they were robust.  We now find that people are now more ready to be online with us.  A lot of our clients, however, were hugely impacted by Covid 19 and we had to walk that road with them. We were glad to be able to help them get through it,” says Ralph.

Plans for the future include continuing the company’s growth and building the Moneycube.ie brand. “We want to help people take control of their money and empower them. We want to be the country’s thought leader, introducing new ideas and ways of growing your money from other markets to Ireland,” says Ralph.

This is the fourth year of the very successful Back for Business developmental programme, which is funded by the Department of Foreign Affairs. Since the call for applications was launched in mid-December by Minister of State for Overseas Development Aid and Diaspora Colm Brophy, TD, there has been great interest in the initiative. To learn more click here