How Cork and Mayo-based Cosmetic Creations engineered the perfect pivot in the face of Covid-19 and has secured its future for the new normal with its Airmedica hand sanitiser range.

The business story of Ireland in 2020 will no doubt be dominated by Covid-19 and the chilling effect it had on the nation’s economy. But if there is light in the darkness and turmoil it is the brilliant examples set by Irish businesspeople who used their ingenuity and creativity to good effect. And Irish company Cosmetic Creations exemplifies this through a brilliant decision to create a new hand sanitiser product line under the Airmedica brand.

The company, which is owned by Aiden Corcoran and his wife Lorraine, is probably best known for the fact that it manufactures more than half of the country’s supply of fake tan. But there are many more strings to its bow and the company, a renowned contract manufacturer of cosmetics, supplements and skincare products, has pivoted to also manufacture its own brand of hand sanitiser to meet a pressing national need.

“It was a decision of Aiden and Lorraine’s to say no, that not until Ireland is flooded with hand sanitiser they would not export it until then”

Airmed is the ancient Irish/Celtic Goddess of healing and in the spirit of healing the Irish economy the move has created 20 new jobs at Cosmetic Creations as a result.

The Corcorans, both originally mechanical engineers, met while working at Hewlett-Packard. After setting up their own successful engineering consultancy Horizon in 2010, they wanted to get into manufacturing and acquired contract manufacturer Cosmetic Creations which was based in Claremorris, Mayo, in 2017.

“They decided they wanted to bridge the gap between pharmaceuticals and life sciences,” explained Breffney O’Dowling Keane, market development manager at Cosmetic Creations. “To enable this, they acquired the Yves Rocher plant in Cork and retained 30 of the original employees.”

The products developed by Cosmetic Creations won more than 14 national awards in 2019 and the company is passionate about using the best ingredients possible to deliver bespoke products that adhere to the highest manufacturing standards. 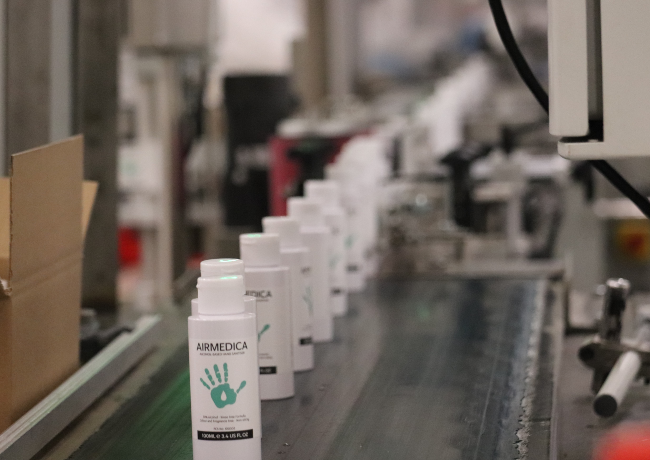 “When Covid-19 hit everybody in Ireland was wondering what to do next,” said O’Dowling Keane. “The team at Cosmetic Creations decided to make use of the labs it has on site and through working with its labs as well as its marketing and product design teams we sparked on the idea of making business-to-consumer (B2C) hand sanitiser.”

At first this presented a number of problems, in particular the supply of alcohol and plastic bottles and ensuring a continuity of supply as borders closed.

In just eight weeks Cosmetic Creations pivoted to include the manufacture of hand sanitiser, starting on week one with 50,000 bottles to now producing more than 350,000 bottles a week.

And that was how the Airmedica brand was born with the company now selling its range of 100ml, 250ml, 500ml, 1,000ml and 5,000ml bottles of sanitiser as well as its existing cosmetics, self-tanners and supplements.

In June it plans to launch a complete range of soaps, sanitisers and moisturisers to enable consumers to cleanse, sanitise and protect their skin.

As well as selling the brand online and in stores across Ireland, the company is donating 1,000 bottles a week to hospices, hospitals and charities in Cork, Mayo and Dublin. Working with Diageo, the which donated 50,000 litres of alcohol, Cosmetic Creations also donated hand sanitiser to the Health Service Executive (HSE).

Nurturing in the new normal 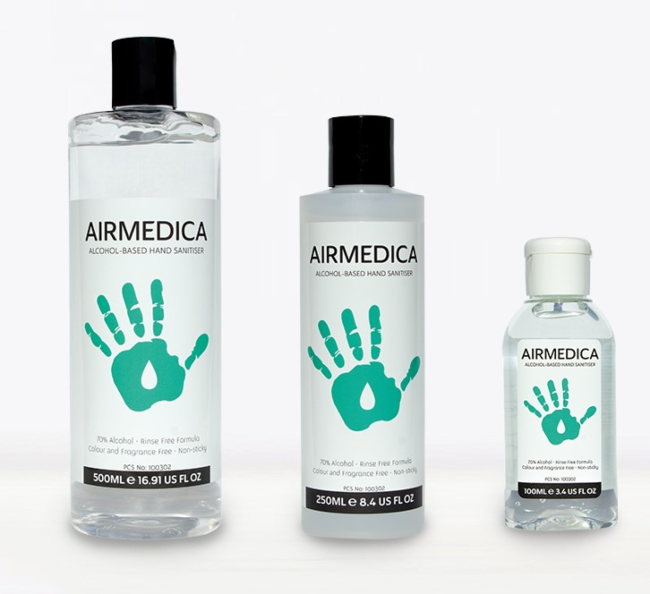 As O’Dowling-Keane recalls, Cosmetic Creations had already begun producing its hand santisers just as Ireland went into lockdown as a way of helping out by using its extra capacity. But orders began to rise exponentially, and this created a unique set of problems.

“Pricing for componentry like plastic bottles went through the roof, the price for shipping from Asia increased fourfold and a lot of people were trying to manufacture sanitiser and the core raw material is alcohol.”

Another challenge was securing a PCS number and the EN testing to allow the company to sell sanitiser while stating and proving it could kill bacteria with 99.999pc certainty.

Luckily the Department of Agriculture had fast-tracked the process, which normally takes up to 18 months. In addition, the company’s owners decided that even with the phone ringing off the hook from customers in the UK and Europe, they would only sell the product first in Ireland.

“It was a decision of Aiden and Lorraine’s to say no, that not until Ireland is flooded with hand sanitiser they would not export it until then.”

The pivot has allowed the company to invest heavily in its manufacturing processes and develop new products like family pack plastic pouches of sanitiser that people could then use to refill reusable bottles. “This equates to about 75pc less packaging and also ensures continuity of supply to the customer.”

The company has also secured deals with Musgraves to stock its products across SuperValu stores in Ireland.

The next stage includes the launch of new handwashes and hand creams to help strengthen and build back up your skin’s natural defences.

O’Dowling-Keane said that the move into hand sanitiser will complement Cosmetic Creations’ existing product lines. “It will certainly be part of it. As a result of this crisis people won’t just want to look their best but will be more aware of their personal health.

“The move has certainly increased our revenue and by taking on 20 new people we now employ more than 100 people.

“We will continue to manufacture cosmetic products but it is incredible to be able to make something that keeps people safe at a time that they need it most and to be there for organisations like the HSE who would have been short 2m units of hand sanitiser amidst the crisis.”

You could say that the company has set itself up for success in the new normal, combining safety and hygiene with the need to live life and feel good.

“We are firing on all cylinders,” O’Dowling-Keane concluded.

Irish economy down but certainly not out